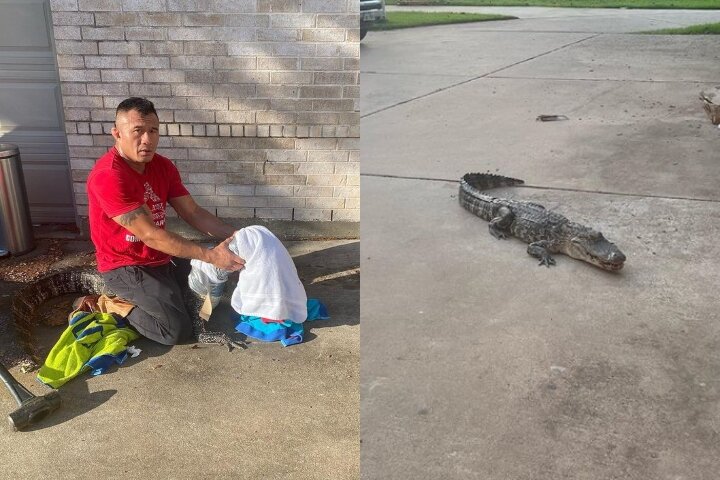 Some days are weirder than others… But when you see a BJJ black belt square off against an alligator, well, that one is surely going to make it to the top of your “weird days” list.
So, prepare yourself, because this is exactly what happened to Mike Trinh in Missouri City.

Mike – a former professional MMA fighter and a BJJ black belt – was having a slow, peaceful Tuesday morning. But then, his daughter ran up to him and said that there was an alligator in front of their house.
Trinh recalled what happened in an interview for FOX 26 Houston report:

She ran back, told me there was a gator in front of the house. I thought she was playing, trying to skip school and I said: “No, you’re going to school.”
[Then I] came out and that thing was waiting right in front of my door. I’ve seen deer, coyotes, hogs. I’ve never seen an alligator out of the water… I guess you can cross it off my bucket list.

He tried calling the professionals to take care of the alligator. But as he was unable to reach them immediately, he took matters into his own hands.

Once you sit on its back, I pinned him with my knees on his head. I spun to the back, back take, grabbed the mouth.

After getting the gator under control, Trinh drove the animal to a local pond and made sure that it returned to its natural habitat:

I figured (it was) the right, humane thing to do was just release it back.

Mike Trinh trains at Gracie Barra Westchase (Houston) and even has a win under the Bellator banner. Back in 2016, he submitted Joe Angel Zamora via Armbar – as a part of the Bellator 149: Shamrock vs. Gracie undercard.