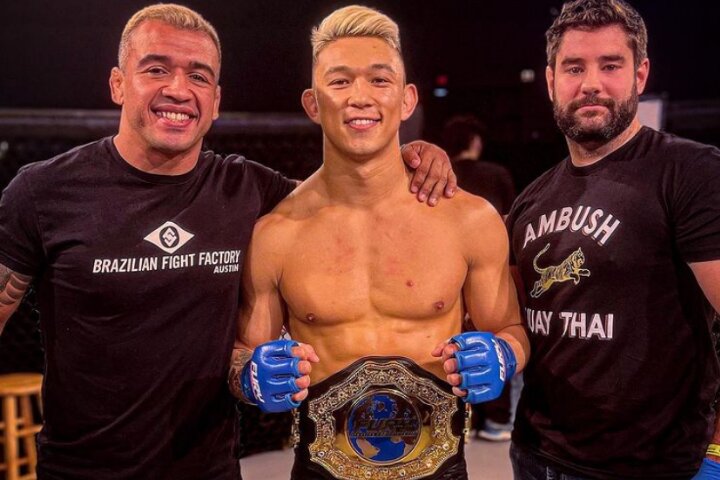 Kody Steele is a well-known grappler, coming out of the Brazilian Fight Factory in Austin (Texas). He competes rather frequently at high-level tournaments such as Who’s Number One (WNO), Submission Underground, and Third Coast Grappling. Most recently, he won third place at the ADCC East Coast Trials, where he lost to his teammate William Tackett.
However, Steele is also an amateur MMA fighter. His first bout was back in August this year, when he won in the very first round.

His second amateur MMA fight took place last Sunday (November 21), at Fury FC 54. There, he showed that he’s much more than an elite grappler; he is an outstanding striker as well! He managed to improve his MMA record to 2-0 with a 13 second knockout.
Check out Kody Steele and his right hand in action on the video below:

Following the win, Steele was more than grateful for his success:

This past weekend I was able to secure the win and take home the @furyfighting welterweight title.
This fight I really wanted to showcase some of the striking tools that I’ve been working on. After the first 13 seconds, I was able to get a walk off KO in the first round.
I just want to say thank you to everyone who supports me and who has been sending me awesome message.
Thank you everyone who took the time out of their schedules to help me prepare for this fight.
And big thanks to my amazing sponsors and supporters who keep making this dream a reality!
I’m excited to see how this journey is gonna unfold and I have a feeling that this is only a glimpse of what I’m capable of!
Until next time lessss gooo!