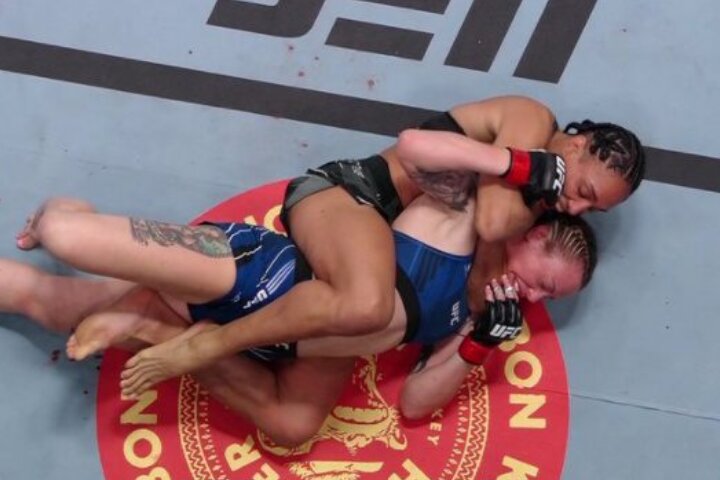 Rear Naked Choke… The Lion Killer! A (nick)name proven right over and over again, most recently at a UFC Vegas 43 flyweight bout; where Taila Santos used it for her first-round submission win against Joanne Wood.

But before that, there wasn’t a lot of grappling to begin with. Wood and Santos exchanged a lot of strikes on their feet, with Santos carrying the “conversation” for the most part with the speed of her technique. She managed to combine that pace with her aggressive pressure, until eventually she found an opening and dropped Wood onto the canvas for the first time. And, even though she managed to get up, Wood was dropped yet again with a big right hand.
As she was down, Santos seized the opportunity to take her opponent’s back. From there, she delivered punches and carefully set up the Rear Naked Choke, until Wood freed up her neck and was forced to tap out.

[ #UFCVegas43 is LIVE on @ESPNPlus ] pic.twitter.com/xpOgNXp7mY

Wood wasn’t angry about her loss to Taila Santos, though. She carried herself through with a true fighter’s spirit and grit, as it’s obvious from her Instagram post:

Felt great tonight and I had a great camp no excuses I just got caught… Congratulations to my opponent Santos, she is a beast!
This is an unforgiving sport even when you do everything right and everything in your power to be the best prepared you can be it can still just not be good enough. Hard pill to swallow but l love it and I ain’t giving up!