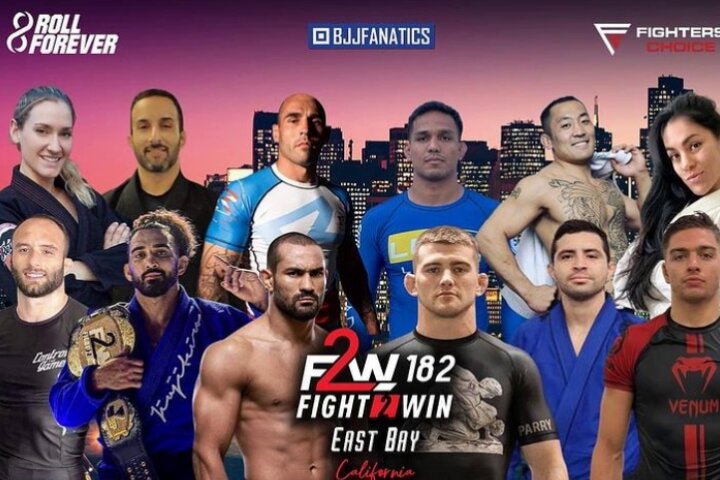 Today, on August 28, the Fight To Win (F2W) 182 tournament will take place. It’s headlined by a match between the world No Gi champion, Dante Leon, and an ADCC champion, Davi Ramos. The card also features other elite competitors, such as Gianni Grippo, Edwin Najmi, Samir Chantre and others.
Check out the full F2W 182 line-up below:

The match between Leon and Ramos is on the forefront. Both athletes are extremely explosive and very athletic grapplers, and possess superb wrestling skills. Lots of takedowns can be expected in their bout.

Dante Leon is moving towards this match with a lot of recent competitions in his arsenal – and with a lot of successes in them. He has been on a row on the IBJJF circuit, considering that he won double gold at the No Gi Kansas City Open tournament, as well as gold at the No Gi Charleston Open. He had also earned impressive wins against Tye Ruotolo, Renato Canuto, Kody Steele, and alike.
Davi Ramos, on the other hand, has not competed all too regularly over the last few years. In 2021, he competed just once – at Fight To Win 177, where he lost against Pedro Marinho. Previously, he competed at Fight To Win 132 in 2019, losing via decision to Garry Tonon.

The face off between Samir Chantre and Gianni Grippo is no less exciting. This year in May, Grippo won the No Gi Pans and then followed up with winning two golds at the No Gi Miami Open. More recently, at the Emerald City Invitational, he defeated four opponents in one night – including Kennedy Maciel, an ADCC silver medalist.
On the flip side, Samir Chantre has also been competing at an elite level for a long time. In 2009, he acquired silver at the IBJJF No Gi Worlds. After that and up to this point, he won the No Gi Worlds three times and No Gi Pans twice. He last competed at the Fight To Win 176 event, where he won via decision over Orlando Castillo.

Additionally, Edwin Najmi will take on Jackson Nagai. Najmi is considered as one of the best submission specialists in the world, while Nagai is a guard passing specialist who earned silver at the 2020 IBJJF Pans.
It’s a stacked card!