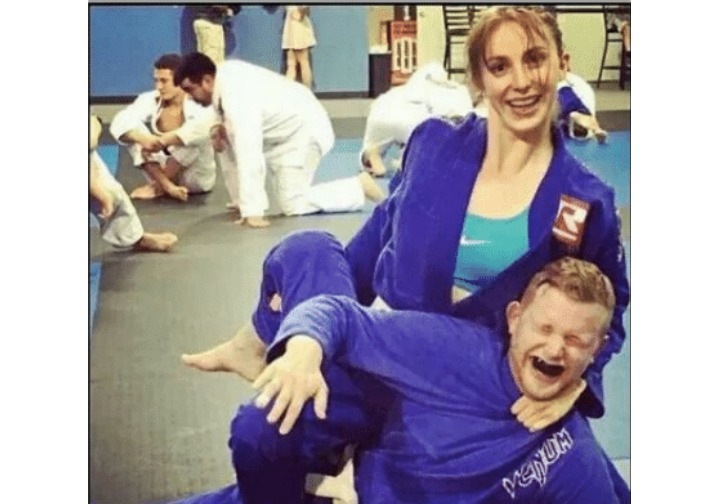 Starting with Brazilian Jiu-Jitsu can be an unusual experience for everyone, men and women alike. But the „online world“ tends to share much more advice for men than it does for women, simply due to the fact that there are more men than women training the sport.
However, if you’re a woman and looking to start BJJ, don’t fret! You’ll find that there are a lot of female counterparts that roll.

Here are 10 tips that will make your time training a bit more enjoyable and productive.

The most important thing in Jiu-Jitsu is to keep going. You’ll have to persevere; keep showing up to training as often as you can, because that’s how you’ll blast through plateaus and any doubts that you may have.
Consistency triumphs all things in BJJ. Keep going.

You’re not here to get injured, you’re here to learn. And to do that, especially in the beginning, chances are that you’ll have to pick your training partners.
If at all possible, try to drill and roll with blue belts and above, or seasoned white belts. The last thing you want is to roll with a spazzy white belt who’ll injure you.

3) IF SOMEONE MAKES YOU FEEL UNCOMFORTABLE…

4) IF SOMEONE MAKES YOU FEEL REALLY UNCOMFORTABLE…

… Then try to let them know that you don’t appreciate that. Or, as a last resort, feel free to approach your instructor after training and share your worry with him.

There may be a guy in your academy who’ll be rude in one way or another – either to you, to other women, or to everyone. It’s your right to let him know that it’s not okay to behave like that towards you.

It’s really important that you enjoy the atmosphere in your BJJ academy. You should feel welcomed, in an environment that’s both safe and conductive to learning.
If you don’t feel „at home“ after a few months, then it may be time to find an another place to train at.

If there aren’t a lot of women in your academy (or if you’re the first girl training there), then you can anticipate that some guys may be a bit weird or silly when rolling with you.
This is because they aren’t used to rolling with women. Just like you, they’ll need some time to get used to the new experience.

Some women like having long nails, and that’s cool. But it’s not cool when it comes to Brazilian Jiu-Jitsu… Unless you want to leave scratch marks over your training partners’ faces during rolls.
Trim your nails, keep them short. That’s a really important component of BJJ hygiene.

If you have short hair, tie it up into a ponytail or french braids. Just make sure that it’s sturdy, so it doesn’t get everywhere – because it will already be all over the place anyway.

9) DON’T WORRY ABOUT GETTING TAPPED OUT

You’ll lose a lot more often than not during the first months, and even years, of Jiu-Jitsu. That’s just how this martial art works, and it happens to everyone – not just to you.
But if you stick to it, you’ll begin tapping out others soon enough.

Before calling it quits (as you may be tempted in the beginning), stick with BJJ for at least 3 months. Jiu-Jitsu is a roller-coaster of emotions, and you’ll have plenty of highs and lows on your journey. But chances are that you’re going to learn to love them all – if you persevere.