So You Want To Quit BJJ As A Blue Belt? Consider This First 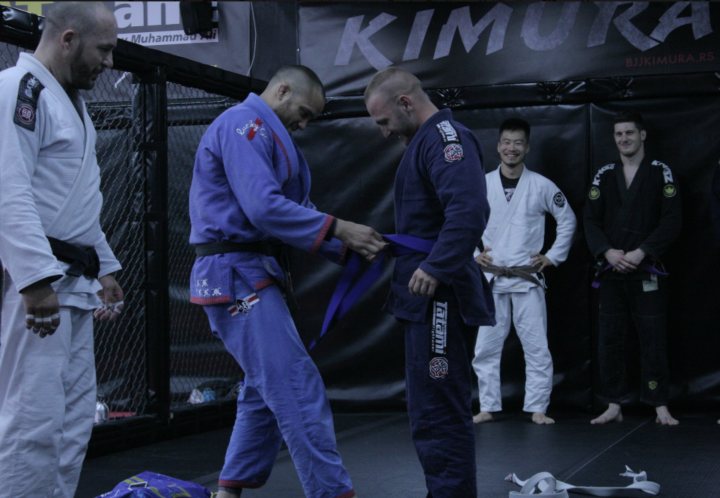 The „blue belt blues“ in Brazilian Jiu Jitsu, despite often being subjected to various jokes and memes, are as real as it gets. They happen to almost everyone that receives their blue belt, to one degree or another. So, if you’re experiencing them at the moment and if you’re thinking of quitting BJJ, please take these things into consideration first.

A jiujiteiro earns his blue belt and feels accomplished! He feels on top of the world, with a heart full of enthusiasm. However, this happiness is often short-lasting; reality kicks the doors in relatively quickly, opening up space for insecurities, doubts and pessimism to make their presence known.
The new – or already seasoned – blue belt starts thinking to themselves about the time they’ve invested into BJJ up until now. The hours upon hours spent drilling and rolling, and for what? For still getting tapped out in almost every roll? For getting injured? And most importantly; missing out on all of those opportunities for other stuff, for months on end, just to receive a blue belt – behind which you still can’t show much skill?

The frustration grows, as one simple question bubbles up: why bother?

SEE IT AS AN OPPORTUNITY

Yes, you’ve invested quite a bit of time into training already. And yes, you might still suck and get tapped by everyone. Sure, the road that led you to the blue belt has been quite a lengthy one; and the one in front of you, leading to the black belt and beyond, stretches out so far into the distance that you can’t even guess where it ends.
Here’s the thing – all of that is true. However, you’ve been looking at this truth through the lens of a warped and unresourceful perspective; why not look at all of this as an opportunity and see it for what it really is, instead of insisting on problems?

You could’ve spent your time in other ways. But if you kept showing up to the mats for this long already, then you surely didn’t do it just for the sake of Jiu Jitsu practice in and of itself; it’s been because you enjoy the training, the atmosphere and the laughter with your friends. You see Jiu Jitsu as quality time; and just as it’s the case with everything you enjoy, rough patches will come and go. That’s the beauty of it. Or, in the words of Barney Stinson: „If all nights are legendary, then none of the nights are legendary.“
You won’t enjoy every single minute on the mats to the fullest. But that’s okay, as it’s enjoying the vast majority of it that matters.

PUSH THROUGH THE OBSTACLES – DO IT FOR THE LOVE OF BJJ

Also, you’re still getting tapped out by everyone? Awesome! That doesn’t mean that you should quit, but it’s actually a mirror of your potential; there’s still so much to learn and improve in… And if you do, you’ll become so good that you can’t even imagine!
And the injuries, the sweat and the muscle soreness? Congratulations, you’re not becoming better just in BJJ, but you’re becoming a person of mental strength and endurance. You’re building yourself up through each and every obstacle you encounter, growing into a person of true fortitude.

Basically, you need to face the following fact: you’re thinking of quitting BJJ not because you don’t like it anymore, but because you’ve encountered a rough patch or two. Don’t quit just because you feel bad; and you will come to enjoy Jiu Jitsu even more than before.