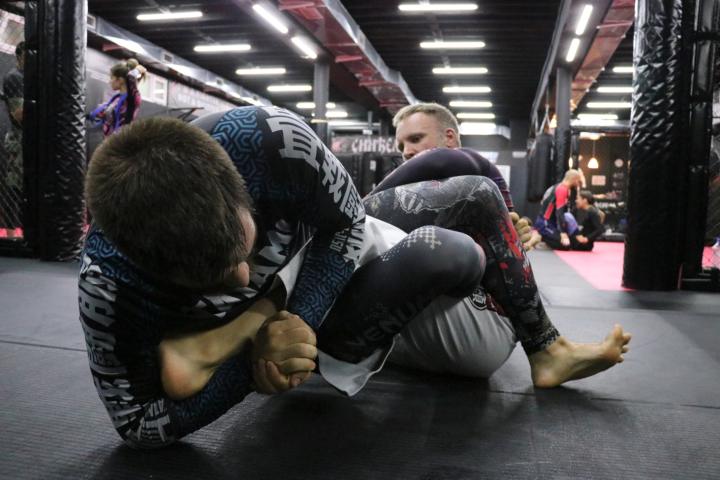 The number one answer to most people’s question of “how do I get better at jiu-jitsu?” is to show up to train more. This is an undeniable fact. More mat time = more progress in the sport. It’s as simple as that. However, many people are already getting in as much mat time as their schedule will allow, and other people (usually the types that are training to be world champions) are already training as much as their body will allow. So how can they make the most of the mat time they’re already getting?

The answer is, primarily, in the mindset you approach the training session with. For newer people, it’s a little bit easier. You know so little about the sport, that every training session is a chance to have revelation after revelation.

As long as you are paying attention to what your training partners and teachers are telling you, you should be able to progress at a reasonable pace.

Eventually though, you will have seen most of the armbars, chokes, sweeps, etc. that are commonly used in the sport, and learning an entirely new move will be rare. Your progression will come mostly in the form of refining details and working on alternative set ups to keep your opponents guessing. These won’t necessarily come from just showing up and grinding out your mat hours. You’ll need to pay close attention to what you’re doing, and what your training partners are doing in response. It’s easy to fall into simple patterns and merely repeat the same moves over and over again. Especially if you’re a high rank rolling with low ranks, or if you’re drilling a move you’ve done a million times before, it’s easy to enter a zombie-like state, and just let your body move on its own. This is burning you some calories, but it isn’t really making your game any more developed.

So how do you avoid falling into the zombie trap when training?

When rolling, the most important thing is to make sure that you’re focused on what you’re doing at all times. If you’re paying attention, you may find that the most efficient option isn’t necessarily what your body is used to doing, and you’ll be able to consciously look for new options. You may discover some new pathways to your favorite moves, or find a new transition from a sequence you’re fond of that you had never thought of before.

It’s also important to consider why certain moves work or don’t work when rolling. If your back take failed, that means there was a deficiency in your technique. What did your opponent do to stifle your attempt? How could you circumvent that? If you’re going through the motions, you may not even really realize that your back take failed, and you’ll just keep rolling from whatever position you ended up in without a thought. If you’re not analyzing why your rolls go the way that they do, you’re missing out on countless opportunities for improvement.

When drilling, you should always be drilling the technique the instructor has shown (it would be disrespectful not to,) but that doesn’t mean you just have to mindless rep it out exactly as shown. Especially if you’ve seen the move many times before. Experiment with different grips to see how many different ways you can hit the technique. Consider what your opponent might do in response, and how you could navigate their defenses. Experiment with follow up techniques. Are you drilling a sweep? Is there a way you could hit that sweep directly into a submission from mount? Could you land in a different position? You’ll get much more out of a drilling session if you’re asking these questions. The first 50 times you drill a technique, you will be noticeably better by the end of that 50th rep. The 50,000th time, you won’t be getting nearly as much benefit per rep, and you’ll get more benefit out of experimenting with ways to mix it up.

Finally, you should always be actively seeking out and working on your weaknesses. It’s easy to show up and work hard at what you’re good at. It’s much harder to force yourself into positions that you are weak in, and look for ways to improve. The people that do this though, ensure that their game is constantly progressing in new and interesting directions. The top game guy that falls apart when you put him on his back is an easy puzzle to figure out. The top game guy that also has lethal sweeps from guard is a nightmare to deal with.

There is a concept in Japanese culture called Kaizen, which means continuous improvement. It is the idea that you should always be actively looking for ways to refine or improve a process. Most people will reach a point where things are working pretty well for them, and then be content to sit back and ride that forever. But there’s no reason it has to be that way. The pursuit of perfection is endless, and if you’re looking hard enough, you’ll always be able to find a way to get a little bit closer.