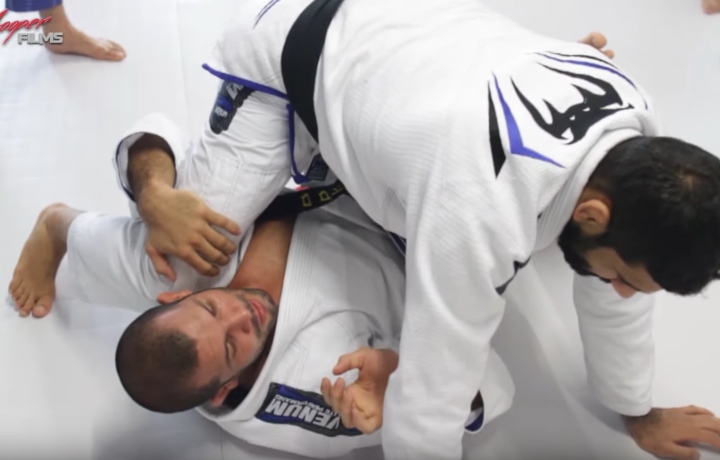 It really doesn’t matter how many techniques you know in Brazilian Jiu Jitsu. Even if you have been training for a longer time than some of your fellow teammates have been alive; and even if you think that you’ve pretty much seen it all… There’s still so much to learn. So many variations, so many subtle details that can change your whole game.
In other words, BJJ is a never-ending journey of learning and becoming better! And one of the best ways to walk that journey is by seeking out variations of the techniques and positions you already know, or are at least familiar with.

In that spirit, Rodolfo Vieira – one of the greatest heavyweight competitors of all time – shows a great sweep variation from the X Guard.

Starting from a Half Guard position, Rodolfo has his knee elevated to his training partner’s chest, solidifying a Knee Shield. He also has his hand posted against the partner’s shoulder, both done in order to frame and keep distance. From there, he simultaneously kicks his „Knee Shield“ leg out and pummels with his arm, getting an underhook.

From there, he needs to establish a Deep Half Guard. The way he does this is by first using his other arm, one that has also been framing by being placed on his training partner’s bicep muscle; diving it deep underneath the partner’s leg and grabbing it.
Rodolfo explains that now he needs to bring the training partner’s leg closer to himself. The way he does this is with his own legs; using his Half Guard lock, he swings the partner’s leg to the side. Pay attention to how, as he’s bringing it over, he changes the lock of his legs; and how his top leg keeps tight to his partner’s. If he didn’t do this, then his training partner would be able to get that leg out pretty easily.

Now’s the time to get the X Guard. Rodolfo explains that, if you are able to, you should grab a hold of your training partner’s or opponent’s pants; but that isn’t too important. What is important is that you push their leg up! This will create space for you to bring your leg in for the X Guard. Once you’ve established this position, you can start setting up your sweep.

The way that Rodolfo does this is by first using his legs to push his training partner away; getting him off-balanced in the process by also making sure that the leg he’s gripping is up in the air. Due to the lack of stability and fearing that he will fall over, his training partner posts with his hands to the mat. This is the exact moment you are waiting for – you’ll use this sort of a reaction from your own training partners and opponents in order to put the sweep into action.
What Rodolfo does from there is that he grips the training partner’s sleeve, up at his elbow. Then, he pushes his partner away from himself once again, getting him off-balanced even more; remember – it’s all about using your opponent’s reaction against them, always being one step ahead! After that, Rodolfo pushes the elbow he’s gripping while – at the same time – pulling the partner’s leg over him (by using his own legs).

This makes up for being a great sweep, which Rodolfo finishes by taking his foot off the partner’s hip, rolling backwards and ending up in a great passing position.

Watch Rodolfo’s demonstration of this great sweep variation from X Guard on the video below: