Chris Haueter On Jeff Glover’s Style:”It’s Like Grappling A Monkey Or A Cat. He Never Loses Balance.” 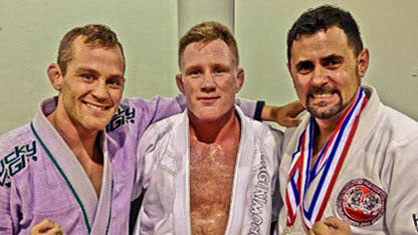 As two hilarious and laid back guys in the sport of BJJ, Chris Haueter and Jeff Glover are very much similar. This might be the reason Jeff Glover called out Haueter to a superfight via twitter last month. With no hesitation, Haueter accepted and even responded with an entertaining and outlandish youtube video that can be found here. It involves his acceptance and preparation for the superfight which was to be held at the Best of the West Tournament in Las Vegas, CA on September 28th.

Chris Haueter has been a black belt for 16 years, mostly learning from the Machado family. He is part of the “Dirty Dozen,” the first 12 non-Brazilians to receive a black belt in the sport of Brazilian Jiu Jitsu. From first sight, it looked as though Glover was disrespecting the legend by calling him out and then being goofy at the beginning of their match, however, Haueter claims to have gained more respect for the 29 year old Paragon black belt.

Jeff Glover sported a purple gi and from the start, played out his funky yet playful style. Haueter is a funny guy as well but was baited into Glover’s smooth and unique movements. The match was full of near dominant positions and submissions between the two from triangles and backtakes to kneebars and chokes but at 3:45 Glover took the win with a nice guillotine.

I caught up with Chris Haueter at the Masters and Seniors World Championships where he doubled as coach and photographer. In response to the superfight with Glover he states:

“He’s not one of the most athletic I’ve grappled with. I feel it isn’t a strength or pressure game but he’s agile like a cat and very elusive. It’s hard to feel where he’s at. Excellent example of the art of jiu jitsu. It’s like grappling a monkey or a cat. He never loses balance.”

This weekend, October 14th, Glover faces Caio Terra in a 20 minute submission only superfight. As far as Haueter is concerned, he doesn’t like to make predictions since anything can happen, “but if a gun is to my head, I would choose Glover.” he concludes.

Watch the Superfight between these two: