A New White Belt Just Tapped Me Out… What’s Happening? 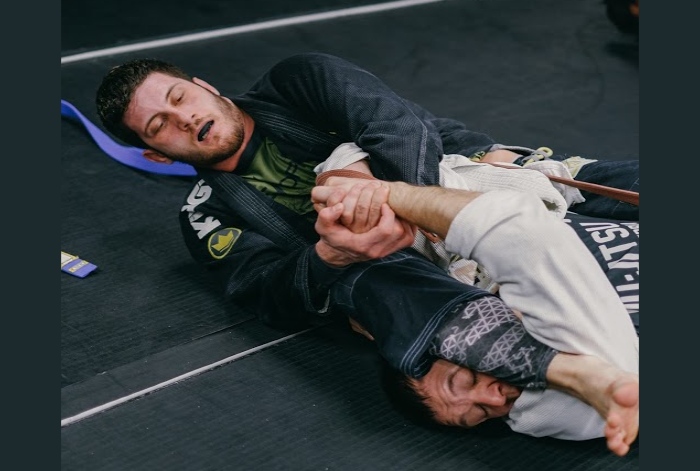 Let’s say that you’ve been training BJJ for quite a while already, maybe somewhere in-between one and four years. And you’re pretty satisfied with your progress! You can see yourself becoming better, as you’re learning new techniques with increasing speed and as your rolls and competitions are successful more often than not.
But then, there comes a day… A new white belt steps onto the mats. You think that you’ll have it easy with them; and then, shock! You’re not only struggling to dominate them, but you actually fall into some sort of a weird submission hold – and you have to tap out.

What in the world did just happen?

First of all, don’t panic. You did not suddenly get worse and no, your Jiu Jitsu doesn’t suck (at least not more than it did beforehand). This will happen to almost everyone, where a new guy or girl comes to the gym and you just can’t seem to find your way around them, no matter how hard you try.

Perhaps they’re physically stronger than you are and are able to translate that strength into some serious advantage. Maybe they are just a lot heavier than you are and so you realize that letting them pass to Side Control was a huge mistake. Also, they may have some experience in other sports which doesn’t have to be necessarily tied with grappling; but that they can utilize while rolling.
Then, on the flipside of things, they may have an extensive background in some other grappling martial art. Stories of white belts just obliterating everyone in stand up – before they decide to announce that they’ve been, in fact, „wrestling a bit in high school“ – aren’t just borderline comical, but true as well.

In other words, just because you got tapped out by someone doesn’t mean that your skill level is decreasing. Your novice training partner may simply have some sort of an advantage which plays well against your insufficiencies; your lack of strength training, being lighter, their experience in other sports, your weak takedown game and so on gives them leverage to „win“.

… BUT THERE’S ROOM FOR IMPROVEMENT

So, what are you supposed to do when this happens? It may be best to, after either the roll or the entire training session is finished, stop for a bit and consider why it is that you lost. Could it be due to one of the above-mentioned reasons? Did you have a bad day? Did you lose heart when you saw that they’re not that easy to outgrapple?
Whatever the reason(s) may be, make sure that you’re honest with yourself and that if it’s something that you can fix, you’ll fix it.

This way, you’re turning a potentially bad experience into one from which you can actually learn from. One, from which you can improve by understanding that sometimes, these things will happen – and they are a great opportunity for becoming a better Jiujiteiro.
You might need to start hitting the weights and gain muscle mass. Maybe you’ll need to focus on your takedowns and other techniques more than you did previously, or perhaps your mental fortitude needs strengthening for when you’re in a bad spot. Whatever it is, you have a chance to improve.

But also, be sure to congratulate that white belt. They’re doing well and they should know it! After all, you now have a training partner with a lot of potential for becoming a fantastic grappler; lend them a hand on their own journey of becoming better in BJJ.