BJJ World Champ Justin Rader: “I didn’t think I had what it took to become a D1 All-American, So I just Focused on BJJ.” 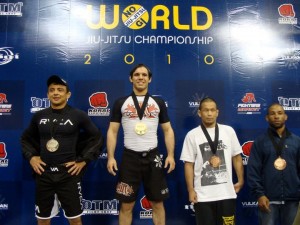 Justin Rader is 2010 No Gi BJJ World Champion from the Gracie Humaitá camp (Oklahoma, US branch) with wins at the world championships (purple belt), and Grapplers Quest Pro Division. Rader was also the very first student to earn the grade of black belt from Rafael Lovato Jr. He was a standout state (Oklohoma) champion at high school, but he reveals that he doubted his ablities to make it as a top wrestler in college and decided to focus on BJJ instead: Source: edsolisbjj.blogspot.com Can you tell us a little about your philosophy around your standup game in BJJ? Justin Rader: You’re welcome. My take-down game is something I have worked on my entire life. My father got me started in wrestling between the ages of 4-5 years old, and I wrestled all throughout high school. I finished as an Oklahoma High School Wrestling State Runner-Up my senior year, and I did not end up wrestling in college. At the time, I did not think I had what it took to become a D1 All-American (let alone a National Champion), and I felt I was better at jiu-jitsu anyway. So I decided to stop my wrestling career there and continue on training only in jiu-jitsu. I look back now, and I know that was definitely the wrong mindset. And whereas I do not look back and regret my decision, as I’ve been able to accomplish much in jiu-jitsu, I do look at it as something to learn from and make sure never happens again; that I would never doubt myself or count myself out. Do you ever see a time in BJJ where having a wrestling base is a negative factor? JR: This is a complicated question, as there is not one clear answer. I believe it really depends on how well both your wrestling and jiu-jitsu games flow together. If one causes you to compromise the other, then it is a negative factor. If one complements the other, then it exponentially increases your ability and gives you an X-factor over so many others you will face. And the only way to overcome and gain this X-factor is through years upon years of training both styles to work together. This begs the question of how to more specifically accomplish this. Wrestling (especially take-downs) is very explosive with near-constant movement, whereas jiu-jitsu usually involves more tension, pressure and holding of position with a slower, more methodical progression of position to submission. And many times (from what I have seen), wrestlers trying to learn jiu-jitsu often feel they don’t need to train in the gi. Likewise, I’ve often seen many who train primarily jiu-jitsu with the gi who don’t think they need to train no-gi or take-downs. Both are wrong mind-sets in my opinion. I truly believe it is important to be proficient in both the gi and no-gi, to provide the best overall instruction to your students and understand the game on an even deeper level then you would just training one over the other. Of course, you will always prefer one over the other, and that’s ok. The million dollar question: has anyone ever taken you down in a BJJ competition? If so tell us about it. JR: Haha, well nobody’s perfect. Yes, I have been taken down in competition before. I believe the last time I was taken down in my weight class was against Wilson Reis at the Grapplers Quest All-Star Professional Lightweight Tournament in 2008. We had fought once prior to that also the previous October in the Lightweight Tournament from Hell in New Jersey. Wilson has an excellent arm-drag to single leg takedown, as well as good defense to the front headlock. He’s also lightning-quick. He took me down twice in that meeting, and I took him down once, and he ended up the victor. That experience helped me prepare for our next match. I made some modifications to my style of wrestling, and in our next match, I took him down twice and he took me down once (with the same arm-drag single leg), and I ended up the victor. Those were both great, exciting matches with non-stop action. Read full interview