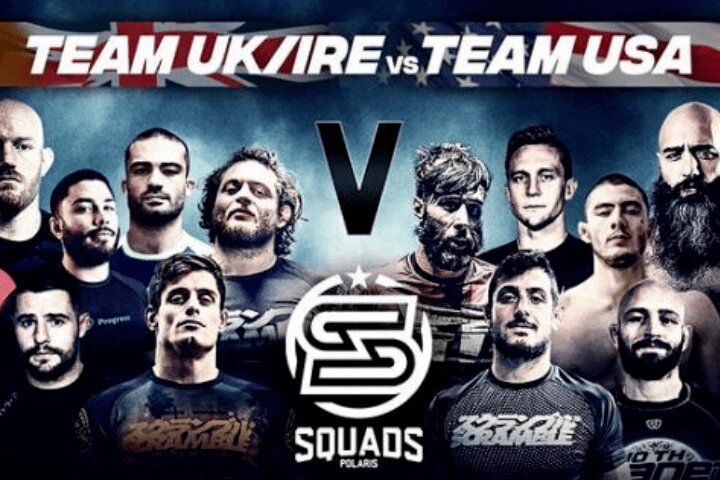 The Polaris Invitational is back! This time, with their Squad event: pitting the Squad UK & Ireland versus Squad USA.

Just in case you need a bit of a refreshment. The Polaris Squads format is made out of two teams of eight athletes, where four members are under 75kg and four members are under 95kg. Each team has a team captain who acts as the focus point for the team, as he makes the decision on which member competes – and also playing an important role in case the event ends in a draw.
The event itself consists out of two 40-minute halves, where during each half the event is decided based on the “winner stays in” format. Each team sends one competitor and competes against each other for the duration of five minutes.

SUPER FIGHT BEFORE THE SQUADS EVENT

Before the “Squads” event takes place, however, a number of prelim matches will take part – as well as an exciting super fight between Nastasa Silviu and Kyle Boehm!

Silviu is an underdog in the match who’s had mixed results at the Polaris stage so far. He beat Jamie Hughes, for example, but also lost to Jed Hue and Taylor Pearman.
Kyle Boehm, on the other hand, holds many notable wins at the BJJ Fanatics’ Grand Prix, beating Lucas Barbosa among others. He also faced Gordon Ryan a while back on Who’s Number One, but lost in the end.

Both Squads feature elite-level grapplers who have quite a bit of experience both in the ADCC and IBJJF alike. Here’s the lineup for both teams: