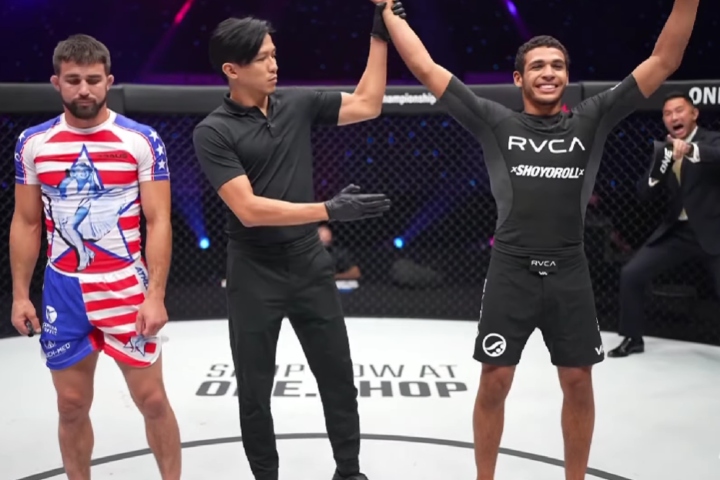 Tye Ruotolo… Is a force to be reckoned with. He is a current Who’s Number One welterweight and middleweight champion, and an IBJJF brown belt world champion as well. And last Friday, May 20, he put on a stunning performance against none other than Garry Tonon!
He submitted him in under two minutes with a D’Arce Choke, earning a near-perfect ONE Championship debut.

The bout started with both athletes standing. Tye was the more aggressive athlete from the get-go, going for collar ties, Single Leg, and Ankle Picks. Eventually, he managed to gain the upper hand and threw Garry to the ground.
Garry stayed down on the canvas and went ahead to play his game from Open Guard. However, Tye kept going with his aggressive pace and passed Garry’s guard. He found an opening between Tonon’s neck and arm, sliding his own arm in-between and locking up a tight D’Arce Choke.

Garry tried to roll out of danger, but Tye’s setup was too tight. He got the tap in under two minutes into the match and received a $50,000 fight bonus.
In a post-match interview, Ruotolo said:

I’ll be honest, when I first took the match, I thought it was gonna take me about six or seven minutes to get the sub. Through fight week I was sizing up Garry and I thought, I realized, it was gonna come a bit quicker.

Watch the entire bout on the video below:

Also, Tye’s brother – Kade Ruotolo – had his own debut. He fought against Shinya Aoki, securing a decision win in a dominant display of skill and pace.