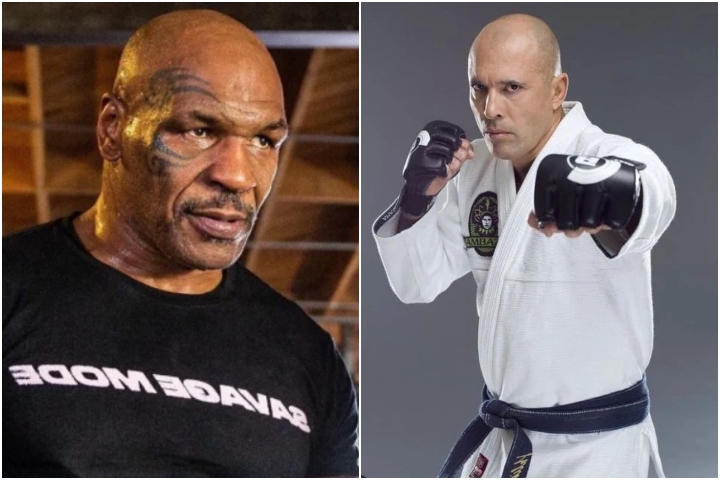 Mike Tyson is one of the most recognized athletes in the world. Known for his terrifying knockout power and his aggressive forward movement, Tyson has won the WBA, WBC, IBF, and The Ring heavyweight boxing titles during his career.
Mike also managed to end up in prison. And, while he was looking to come back to boxing after spending three years in jail, the Gracie family was arranging the first ever UFC. It was a successful one, especially for the Gracies; as Royce Gracie won the Championship multiple times.

But a little know fact is that the Gracie family, back in the ’90s, wanted to challenge Tyson to a fight! Sportswriter Fiaz Rafiq details what happened in his book about the Gracies, “The Top: Enter the Octagon, the Ring and Entertainment”:

[Tyson] was challenged by the Gracie Brothers, in particular Royce, back in the early 1990s. The UFC champion’s perception was that Tyson was the best boxer in the world, but he refused to accept that Tyson was the best “fighter”.
Royce wasn’t going to rest until he did everything within his means to provoke the heavyweight champion into accepting a real fight in a no-holds-barred setting.

[So], to settle the matter once and for all, Royce formally challenged the most feared boxer of our time to a fight to the finish, and so did his elder brother Rickson.

Unsurprisingly, Tyson was willing to fight. However, his managers and lawyers were against it. Royce explained:

I heard that my brother tried to bring him in [to the UFC]. He had accepted, but people around him—the lawyers, managers, and the Commission—said: “No way”, because boxing had too much to lose.
But he had accepted and wanted to do it. I talked to him before and he was like: “I’d love to try this stuff out, man.”

But the people around him did not allow him to do it. If he lost a fight, if it happened, well, boxing was already in decline in America, so it wouldn’t be good for boxing.