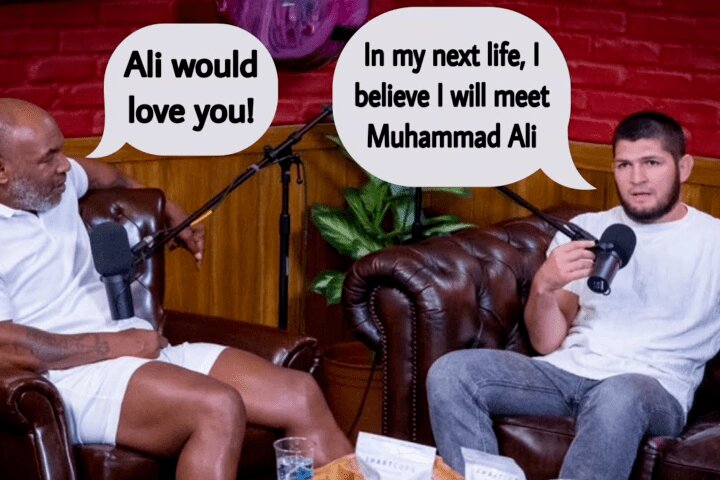 Meeting your idols, the people you’ve looked up to, is always amazing. Especially if you put in a lot of time and effort into your craft… And managed to bring all of those sacrifices to fruition.
If you understand what’s being talked about here, then you’ll know just how big of a deal it must’ve been for Khabib to meet Mike Tyson.

The two met on Tyson’s “Hotboxin’ with Mike Tyson” podcast, alongside with Henry Cejudo and Ali Abdelaziz, continuing to speak for a good amount of time. The episode is still to air, but one fragment of the conversation managed to leak out. In this part of the episode, Khabib explained about how he has had three idols while growing up. Namely: soccer player Ronaldo (from Brazil), Mike Tyson, and Muhammad Ali.
He says that he’s had an opportunity to meet Ronaldo and Mike (obviously), but hasn’t had the chance to meet Ali. But he remains hopeful, for he says: “I’ll meet Muhammad Ali in next life.”

In the post-podcast interview, Khabib emphasized that he was extremely satisfied with how the podcast went; as well as that he believes that Mike is a really energetic person.
You can watch this part of the conversation on the video below: