Khabib on Fighting Against GSP: “That Fight Would Make a Ton of Money” 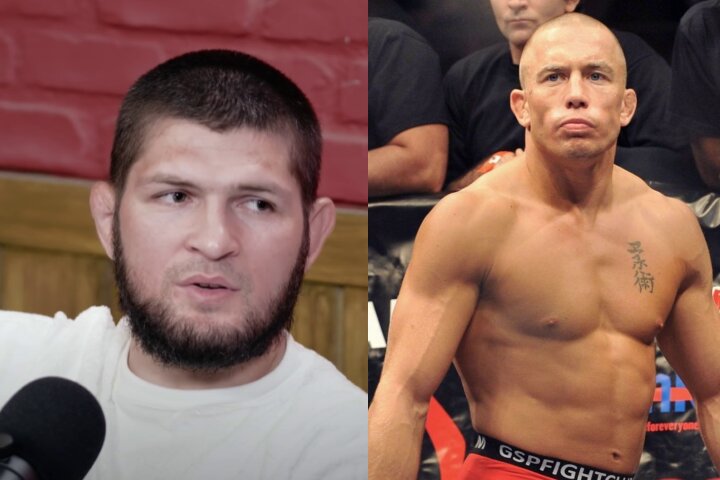 Many MMA (and BJJ) fans’ dream fight is the Khabib Nurmagomedov vs. Georges St-Pierre one. Unfortunately, it never came to fruition… But what would happen if it did? What are Khabib’s thoughts on that?
Khabib was a guest on the recent episode of “Hotboxin’ w/ Mike Tyson” podcast, where he discussed this exact question.

At the very beginning of the conversation, Khabib says that a fight against GSP was his father’s dream fight. Because, it was in 2006, 2007 and 2008 that St-Pierre was in his prime; and Khabib was quickly developing as a fighter. That’s why he and his father would always watch and learn from Georges.
However, at this moment, Khabib doesn’t think it would make for a good fight. The reason? He is 32 years old and St-Pierre is 40 – a big difference in age.

Henry Cejudo – Tyson’s podcast co-host – told Khabib that, if it were for him, that he’d come back from retirement for the money. But that isn’t the case in Khabib’s case, as he places peace ahead of financials.
That is, Khabib’s been fighting in professional MMA for 12 years. He’s “had enough” and is now into entrepreneurship; which he believes is much better than fighting.

But ultimately, if the fight against GSP were to go down, what would happen? Khabib isn’t too sure about that. In his opinion, Georges was good, but the two of them have been competing at two different eras… Even though their fight would make a ton of money, as Tyson suggests.
Watch the clip here: