GSP vs. Shaq: The Submission Grappling Match That Never Happened 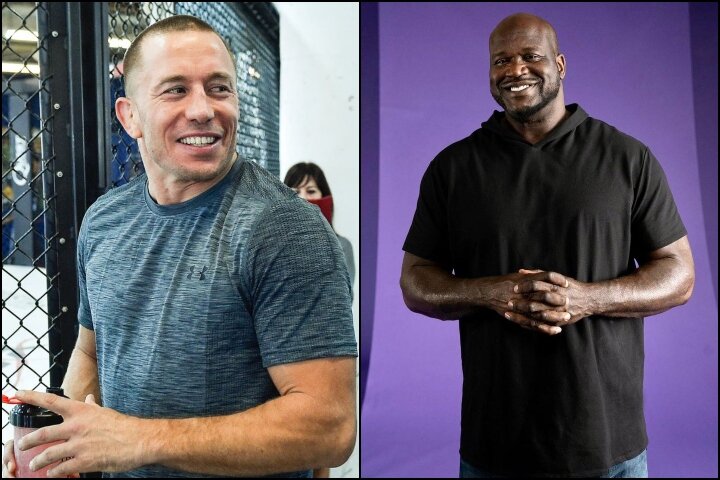 What if we told you that a submission grappling match between Shaquille O’Neal and Georges St-Pierre wasn’t just a figment of imagination… But, rather, a bout that could’ve actually taken place?
That is, as far as Chael Sonnen is concerned – because he wanted to book it for his “Submission Underground” promotion.

In a recent podcast episode, Sonnen explained how he was initially looking to book Shaq against a Los Angeles Lakers player:

I was promoting, doing a grappling match. I got a call from Din Thomas. Din Thomas was working with Shaquille O’Neal. He was training Shaquille O’Neal.
Shaq wanted do to a match. So I was like: “Okay”, and I found another NBA guy, training out in California, who plays for the Lakers.

However, the “American Gangster” then had an another idea… What if Shaq competed against Georges St-Pierre instead?

I’m running all this behind the scenes, right, running past Dana (White), trying to get the numbers, calling ESPN, seeing if we can get on Sportscenter… Whatever Shaq was gonna do, they were very interested.

And I told Din: “You know what? If Shaq really wants to compete, I think this Laker is probably a really good idea… We got a real easy story to tell; two basketball players, two big guys who’ve never done it before…
But what if it was Georges St-Pierre?”

Even the ESPN thought that Chael’s idea was groundbreaking:

Din laughed. But I said: “Think about it. If this is for fun, if this is for exposure, we could take the competitive aspect out of it right away. So now it is just for fun, and we could put Shaq in there with Georges St-Pierre.”

We had some further talks but then I make my call. I call Dana, I call ESPN.
They say: “We’re breaking it on Sportscenter tonight if you have that signed.” They didn’t say that for anything else that we had done.

They said: “We will break it on Sportscenter tonight to announce St-Pierre vs. Shaquille O’Neal on Submission Underground.”

Unfortunately, the match didn’t come to fruition. Which is a big shame… But who knows what the future and Chael’s enthusiasm might bring.