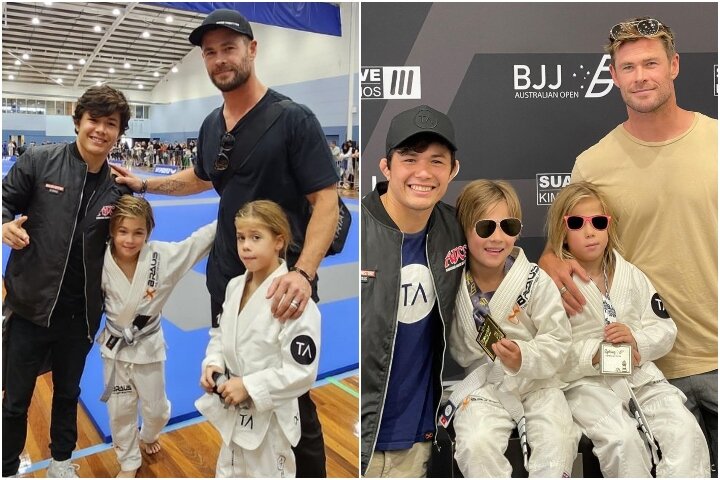 Brazilian Jiu-Jitsu has been drastically rising in popularity over the last few months. And not just among the “everyday folk”; but also among celebrities.
For example, famous actor Chris Hemsworth has been seen at the IBJJF Pan Pacific tournament, supporting his kids!

Thalison Soares is his children’s coach:

Hemsworth also shared that he was proud about his children competing, by posting an image from a different competition:

Super proud dad moment watching my kids at their first jiu-jitsu tournament.
Big shout out to coach Thalison Soares for his amazing leadership and support with all his students.

Along those lines, one of the recently biggest news about “actors in BJJ” has been Tom Hardy’s training session with none other than John Danaher.

Danaher shared the news on his social media:

The team had a blast training the last two days with the great English actor Tom Hardy, who is also a talented Jiu-Jitsu player!! Mr. Hardy is here with some of his British Special Forces friends.
He is a very kind man and a really great representative of Jiu-Jitsu.