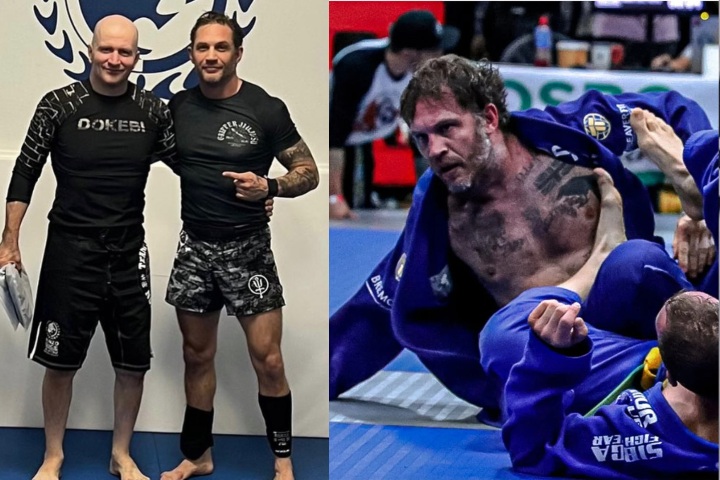 Danaher talked about the experience on his IG:

“Jiu jitsu with Mr Tom Hardy: The team had a blast training the last two days with the great English actor Tom Hardy, who is also a talented jiu jitsu player!! Mr Hardy is here with some of his British Special Forces friends. Mr Hardy does truly great work helping the welfare of former soldiers coming back from war into civilian life through the @reorgcharity foundation.

Jiu jitsu is often useful as a means of getting soldiers back together in a healthy environment that builds the old camaraderie they had in a civilian setting and can help smooth the transition back home. I’ve always been a fan of Mr Hardy’s cinematic work after Georges St Pierre, who was obsessed with The Batman movie in which the Caped Crusader takes on arch villain Bane (played by Mr Hardy), used to quote endlessly from the movie during fight camps! When I was demonstrating technique with him I kept expecting him to say “do you feel in charge?” – as he grabbed me by the neck! 😂😂 He is a very kind man and a really great representative of jiu jitsu.”

Tom Hardy also trained with none other than Renzo and Rayron Gracie.

He posted the news about it on his Instagram account, thanking the entire Renzo Gracie Academy team for the experience:

Rayron Gracie was happy about training with Hardy as well:

His most recent tournament took place at the 2022 UMAC Milton Keynes BJJ Open. There, he competed in the blue belt Masters 3 division, at 82.3kg.
Watch his Bow And Arrow Choke and Straight Ankle Lock finishes on the videos below: