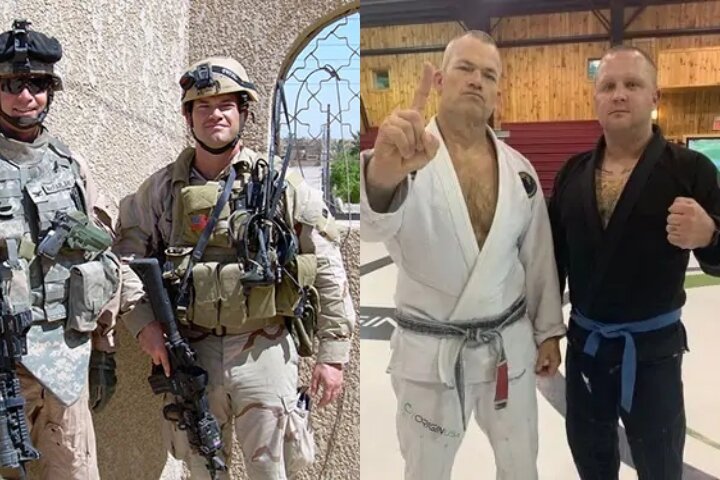 Jocko Willink is a BJJ black belt and a former Navy SEAL. As such, you can rest assured that he knows a thing or two about rolling and being on the battlefield.
But, what are the similarities between the two? Between Jiu-Jitsu athletes and special forces operators?

As you might’ve guessed, Jocko has an answer. And it’s probably not the one you’d expect it to be:

So, clearly – if you want to become good in Jiu-Jitsu, you’ve got to be disciplined enough to train all the time. Same thing with being in the military; if you’re going to be a good operator, you have to have the discipline to push yourself in training.
But you can’t be a person who leans so hard towards a disciplined, structured life that you don’t have any creativity.

In this regard, BJJ is similar to the battlefield:

Because, both in Jiu-Jitsu and on the battlefield, you definitely want to be creative. To figure out creative solutions that people haven’t thought of. Things that your opponent hasn’t thought of, that your enemy won’t think of.
So, you’ve got to find that person who has a balance between discipline and a kind of a wild creativity that [are necessary to] make adjustments.

He explains that good special forces operators can turn on being disciplined whenever necessary; but they also have an ability to think creatively. They are not confined by the bounds of discipline and structure so much so that they can’t think of a solution when a problem occurs.
In Jocko’s eyes, it’s the same thing with BJJ athletes:

If you have someone who only knows how to do a certain move and they can’t think creatively about the other ways to employ that…
It’s not that they’re not going to be good, because they are going to be good. But they’re going to reach limitations.