Jocko Willink: “Don’t Use BJJ In Street Fights & When Outnumbered – Just Run Away” 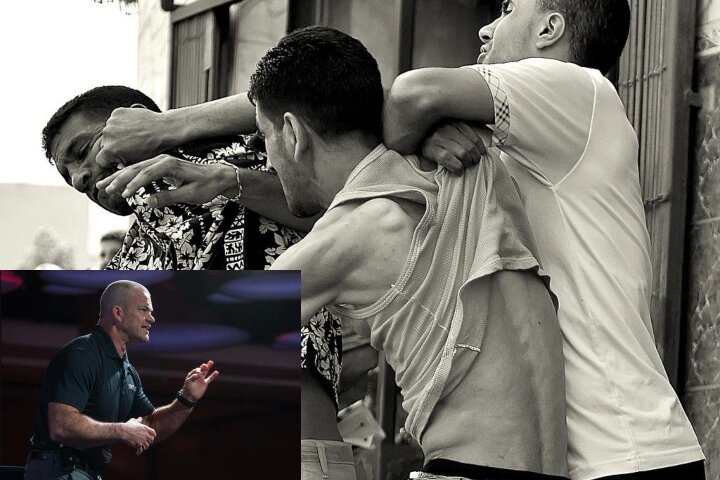 We know. We know that you had the following question pop up in your head once or twice: “Jeez, I’m actually getting good at this Jiu-Jitsu thing. But I wonder, how well would I do in a street fight, in a life-or-death situation? Or when I’m outnumbered?”
Well, Jocko Willink has an answer for you. And it’s the one you’ll want to remember for all times:

Well, first of all: we avoid getting in fights where we’re outnumbered. And you avoid it at all freaking cost. Because, the chances of you winning a fight when you’re outnumbered is very small.

Jocko mentions the example of YouTube videos in which a fighter deals with two, three, or even more people at once – and emphasizes that this is more of an exception than a rule:

If you think that you’re going to pull that off… You’re not. You have a 1% chance of doing that. Even if you’re freaking skilled.

With that said, if you can’t avoid the “outnumbered situation”, Brazilian Jiu-Jitsu shouldn’t be your first option anyway:

So we’re going to avoid getting in situations where you’re getting in fights with a bunch of people. And if we can’t avoid it, yes: Jiu-Jitsu is not your first option! Like: “Hey, I’m going to grab this guy and start to grapple with him, while these three other guys are hitting me in the head with beer bottles.”
You’re not going to want to engage. You’ll want to hit people and get away. Your goal is still to get away.

Essentially, you can get away from almost all situations. Especially when you’re outnumbered – It’s for your own good:

However, there is one scenario in particular where it would be wise to use your BJJ skills. Jocko elaborates:

But the minute you grab me, I don’t have that option [of running away] anymore. I now need to earn that option. I need to counter your grappling, in order to get away from you. And hopefully I can do it while we’re standing! Hopefully my wrestling, my standing Jiu-Jitsu, and my judo are enough to break whatever grip you have – and get away from you. That’s what my goal is.

If I can’t do that and you get control over me, now I have to work even harder. Now you get me to the ground.
[There] I need to know Jiu-Jitsu, I need to know how to get up and get away from you. That’s what Jiu-Jitsu is for in the street.

Watch the video below to get more of an idea so as to what Jocko is talking about: