How To Avoid Injuries When Rolling with Spazzy White Belts? 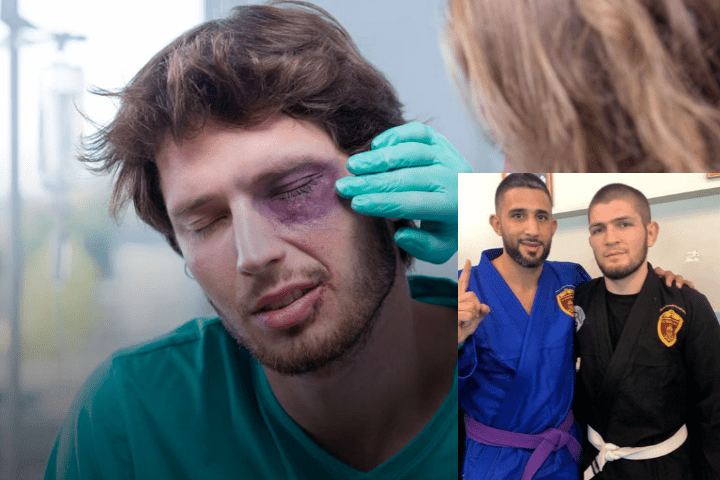 Learning how to deal with those new spazzy white belts in BJJ… Can be a rather difficult task. Although you should have the patience for them (we were all beginners once, weren’t we?), there’s no denying that rolling with absolute beginners can be dangerous. They spaz out all over the place – and there’s quite a high possibility that you’ll get hit.
So, how are you supposed to avoid injuries when rolling with those spazzy white belts? Nick “Chewy” Albin has some invaluable tips.

AVOID GETTING INJURED WHEN ROLLING WITH SPAZZY WHITE BELTS

Figuring out how to deal with people who are inexperienced in Jiu-Jitsu can be rather beneficial, actually. And not just for the sake of your training time; but also for the sake of “real-life scenarios”.
Namely, because you get used to engaging with people who have at least some experience, it’s good to remind yourself from time to time what it’s like to roll with people who don’t know what they’re doing. This serves as a sort of a reality check, that will jog your memory back to what you could encounter on the streets.

Therefore, Chewy advises that you forget about all the complex stuff when rolling with spazzy white belts. Instead – resort back to basics when training with an untrained person. Treat it almost as if were a full-blown MMA fight. As if anything could happen.
For instance, when you’re on the bottom, you’re not going to play De La Riva and you’re not going to invert. Rather, you’ll pull your training partner to the ground, where you’re going to establish Closed Guard; pulling them tight so that there’s no free space. Or you could even play Half Guard or Butterfly Guard, staying close to them, though that depends from one situation to another. Also, keep your hands close to your face for protection from accidental strikes.

Then again, when you’re on top and trying to pass guard, you’ll have to prevent that white belt from kicking you in the face, groin, knees, and everything else.
Therefore, in this case you’ve got to stay low – going for techniques like an Over-Under Pass or even for Half Guard; from which you can utilize your pressure to go for Side Control… But whatever you do, just don’t stay high up.

Hear what Chewy advises below: