Georges St-Pierre Explains What To Do in a Street Altercation 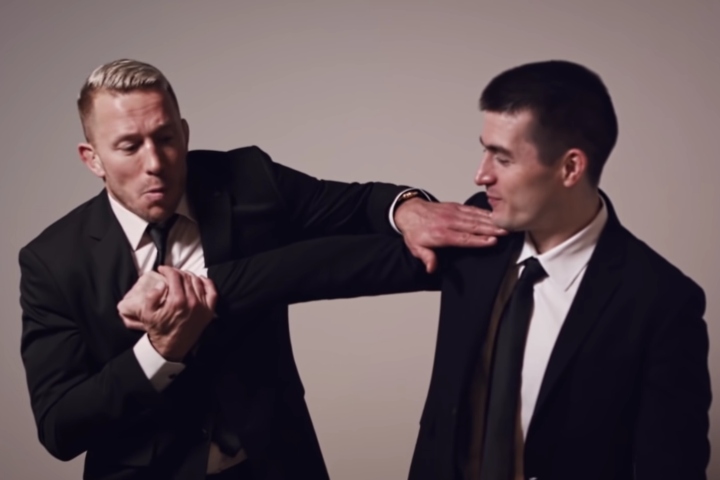 It’s safe to say that Georges St-Pierre – a former UFC welterweight and middleweight champion – knows a thing or two about fighting. And not just about competing in the octagon; but also about what (not) to do when it comes to street fights.
In a recent video published by Lex Fridman, Georges St-Pierre taught him some of his street fight “secrets”… Which just might save you from harm if you ever find yourself in a street altercation.

First things first: GSP advises never to show your body’s centerline to the aggressor. Instead, shift your body to a bit of an angle (in relation to the “opponent”) and intertwine your hands into a “thinking pose”. This, explains St-Pierre, leaves you in a much better position to defend yourself; as your upper hand can defend the incoming punches to the head (and the lower one to the body). But it also leaves you in a better position to attack if needed, because there’s a shorter distance your punch has to travel in order to reach the other person.

That leads GSP to the second piece of advice. If you see that the situation is escalating to a point with no return, strike first. Use the element of surprise to your advantage and try to deliver as much damage as possible before leaving the scene; be it with a punch, throwing fingers into the aggressor’s eyes, punching them in the throat, or by – as GSP says – “hitting the genitals”.
If a weapon is involved, the best thing is to just give the assailant your money and stay safe. However, there’s an exception even to that… Georgest St-Pierre explains on the video below: