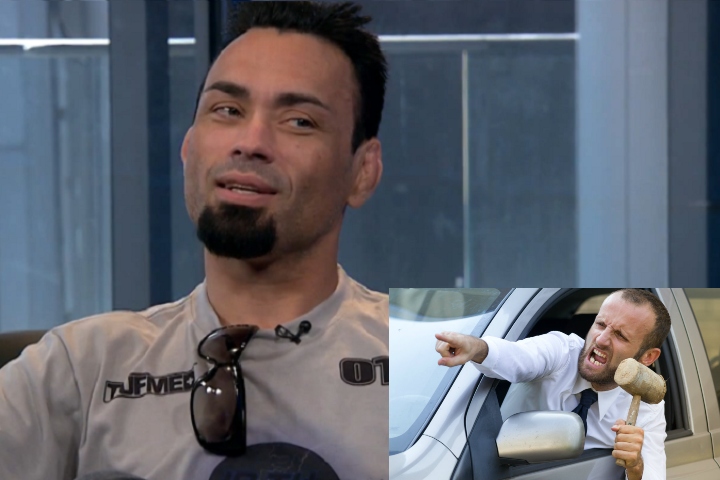 Eddie Bravo, aside of his Jiu-Jitsu genius, is well-known for his ability to tell stories and for making people laugh. So, what could be better than a funny BJJ story, told by Eddie himself?

Eddie knew a really tough purple belt guy, Eric, who trained under Rickson Gracie. He was 5’8” and extremely jacked – Bravo calls him “short Matt Hughes”. And as the story goes, Eric was working as a strip club bouncer during the weekends and loved to fight; always looking for opportunities to prove himself right and the other guy wrong.
Often times, the guys in strip clubs would be drunk and angry because a woman, for whose dance they’d pay money for, wouldn’t give them her phone number… They’d start shouting and become aggressive – and that’s when Eric would step in.

So, one time, a random guy stripped his shirt off and wanted to fight Eric in front of the strip club. Needless to say, Eric accepted the challenge; he closed the distance, took the guy down, mounted him and delivered a couple of punches… Taking the guy’s back in the end and choking him out in a matter of seconds.
That, however, didn’t satisfy Eric – because the fight ended up being too easy and too short for him! Hear more on how it unfolded from Eddie, as well as an additional story on Eric’s encounter with another BJJ athlete in a road rage incident.