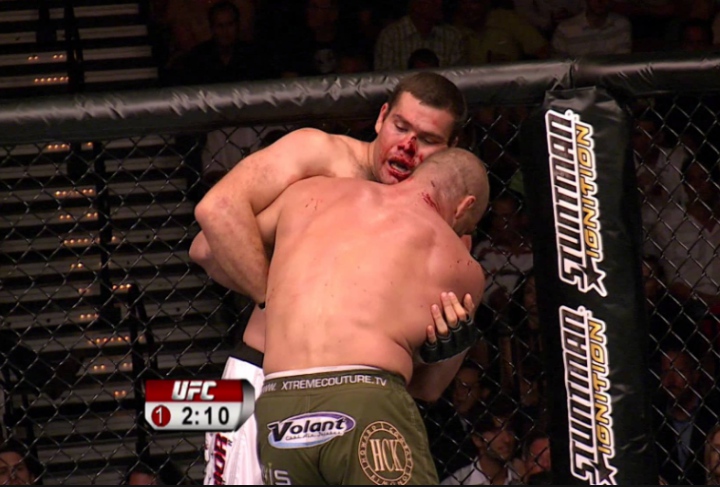 Does it seem to you that Greco-Roman Wrestling translates better to MMA than Freestyle Wrestling does? And that the Greco-Roman wrestlers had way more success in MMA than their Freestyle counterparts?
Chael Sonnen thinks of it that way. In his new episode of „Beyond the Fight“, he discusses why this is so.

The main reason why Greco-Roman wrestlers are better in MMA than Freestyle wrestlers are, Chael explains, is because of their posture. Simply put – there’s no bending of the back, there’s no bending of the knees, no bending of your head down towards the floor… It is a straight up and down motion, where a wrestler encounters his opponent and fights him in a straight up and down fashion; leading with his chest, with his head remaining upwards at all times and with hips remaining in.
And that’s basically how, Chael says, an MMA fight looks like!

He goes on to elaborate that, yes, wrestlers have done well in MMA – but that wrestling itself isn’t a dominant force in the sport. The reason, he says, is that these days the wrestling techniques don’t translate into MMA as well as they did in prior years and decades.
And that is exactly the point which has such an impact on the lack of successes that Freestyle Wrestlers experience in Mixed Martial Arts – they are used to their own techniques, which are all based on a bent over posture, one that doesn’t translate well into MMA!

But, what are some other, additional elements that make Freestyle wrestlers to have a subpar performance in MMA? Chael explains that a very important point is that they are often focused too much on the moment when they’ll get the grips on their opponent. The reason for this is that the sport of Wrestling demands contact, touching the opponent; so, in their sport, the wrestlers have to immediately go for the contact, in order to take their opponents down…

Chael goes on to explain that in MMA there’s something different in this regard; in MMA, you first have travel the distance necessary for making contact with your opponent! You need to have the right entry that will work in an MMA match; and, as said earlier, you cannot be bent over at your waist and wait for your opponent to shoot in, as you can do in a regular Freestyle Wrestling practice!
In other words, the posture, the entries, as well as timing, differ between Freestyle Wrestling and MMA by a large margin. It is a similar thing with Brazilian Jiu Jitsu, Chael mentions, where a lot of practitioners start from their knees or sit down into an Open Guard position.

Taking all of the above into consideration, Chael recommends every grappler that wants to train for MMA to train in such a fashion that will emulate the nature of an MMA match. So, first of all – start on your feet. Chael emphasizes that you shouldn’t go to your knees, that you shouldn’t sit into an Open Guard position, that you don’t concede top position… But that you need to start from your feet and go from there. Also, when wrestling, it’s important not to stop a sparring session when you and your training partner get near to the wall – instead, as it is in the octagon, find a way to use the wall to your advantage.

Watch Chael’s video below in order to hear some of his examples that fortify his opinion, as well as to get a clearer lens into it: