Wrestling: What Elite Wrestlers Know and You Don’t 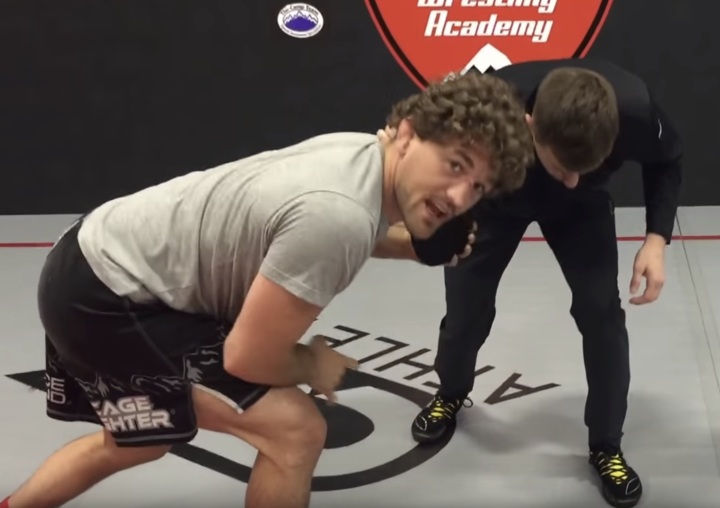 Many wrestlers are focused on learning new moves. We are very move focused in the United States when it comes to wrestling. Wrestling is more than just knowing moves though. Some wrestlers know the seven basic skills of wrestling: stance, motion, level change, penetration, back step, back arch, and lift. But, elite wrestlers know certain concepts that you may not be familiar with. If you’re familiar with all of these concepts that’s great. On the other hand, if you’re wrestling isn’t as successful as you’d like it to be then hopefully you can employ some of the following concepts to become better.

Stance is one of the seven basic skills of wrestling. It’s probably the first concept you learn in wrestling. What constitutes a good stance? A proper stance allows you freedom of movement as well as the ability to protect yourself from your opponent’s offensive attempts.

You don’t want to be in a stance that is too upright. You don’t want to look like the plastic wrestler you see standing on top of trophies. Your opponent shouldn’t be able to read your shirt. You generally want to wrestle forehead to forehead. Your stance should be fairly low. You want to be like a coiled spring or a sprinter ready to explode into your shot. You generally move forward and backward in a lead leg stance and circle with a square stance.

Olympian John Smith talks about keeping your elbows in your pockets. He’s just saying that generally you want your elbows in tight to protect yourself. Also, you shouldn’t be reaching, lunging, or stumbling. Sometimes you can simply approach your opponent in a good stance and wait for him to reach and make contact first. Or, you can circle and stalk your opponent until you’re head to head and then reach for your opponent. Then, as former NCAA champion Tom Brands might say, you want to lay on heavy hands, get into dominant head position, and move your feet.

Olympian Dan Gable talks about making your body into a block. Your arms aren’t easy to grab because they’re close to you. Your head is tucked into your shoulders so your head isn’t easy to grab.

When moving forward or backward in your stance you should continue to have your lead leg or power leg forward so you’re always ready to shoot when the opportunity presents itself. Good stance maintenance is important. Ideally, your shooting hand should be free and protecting your lead leg.

Hand Fighting and Moving Your Opponent

What is hand fighting? Hand fighting is a bit of a misnomer. It’s kind of a misleading term. You don’t want to go out and just start grabbing hands and wrists and slapping your opponent.

Former NCAA champion Daryl Weber states, “Hand fighting is basically knowing where you want to be, where you have the best opportunity to score, forcing it on your opponent and also knowing how to clear out of your opponent’s ties and going back to where you’re comfortable.”

Unfortunately, a lot of wrestlers get into a collar and elbow tie and just sort of dance with each other. Or, wrestlers grab with their hands but don’t move their feet. You need to move your opponent. You need to push and pull and circle and really commit to it.

The Purler brothers will tell you that good hand fighting creates motion which helps you unbalance an opponent and set up attacks.

You also need to learn to sprawl properly, downblock, and reshoot.

Henry Cejudo, Damion Hahn, and several other elite wrestlers have stated that wrestling is all about the angles. For instance, learning to execute a sweep single and really cut the corner is important.

Drilling is one of the best ways to improve your wrestling ability. The rehearsing and repetition of moves and techniques is generally not as fun as live wrestling but is extremely important.

When you drill moves over and over your body remembers how to do it so you don’t even have to think about it during a match. Drilling allows you to perfect different moves and techniques. Don’t simply practice one set-up and one finish over and over. Practice several set-ups and finishes. Know how to handle the different positions and situations that may arise during a match.

You can also get in a very good workout with hard drilling. Hard drilling can work as well at getting you into shape as live wrestling. But, drilling has the advantage of being able to really sharpen your skills.

Drilling can allow you to find ways of getting out of bad positions which is extremely important.

Chain wrestling is just what the name suggests. It’s putting moves together in a chain. It’s the ability to flow or transition seamlessly from one technique or move to the next.

Sometimes we view wrestling in bits and pieces. We think about set-ups, takedowns, defense, riding, and other segments of the match. We shoot for a takedown and get stopped and then get to our feet and begin again. Or, we get the takedown and then we begin thinking about another piece like riding. But, ideally we should flow from one piece of wrestling to the next.

Musical notes and patterns don’t mean much until they are strung together forming a complete and seamless song. Good dancers flow seamlessly from one step to another. They have fluidity and grace. All of the techniques and moves you know shouldn’t just be considered separate chunks. Ideally, each piece of your wrestling should link to the next in a fluid manner.

Former world champion John Smith states, “We put two things together. That’s chain wrestling, that’s flow wrestling. You can take this as far as you want. When you’re talking about chain wrestling it can be never ending until the guy is on his back and you pin him and you get your hand raised. That sequence of moves leads you into dominating your opponent, leads you into never letting up on your opponent. That’s exactly what you want.”

Former NCAA champion Terry Brands states, “It’s endless. That’s what we love about wrestling. We’ve just got to get that mindset that it’s not chunks. That’s not how it works. That why guys have trouble. That’s why guys struggle.”

Brands says that sometimes wrestlers are so fired up to get that first takedown and so unsure of their abilities that it’s just a relief to get that first takedown. So, we let up a little bit. Or, perhaps a wrestler has simply never learned to chain wrestle. He gets a takedown, let’s his opponent get to his base, and then he begins to wrestle again as opposed to going from a takedown right into a ride or pinning combination.

After a takedown, we need to keep the pressure on and extend to reach an arm or maybe we can be looking for a Turk or Navy ride.

Or, perhaps our initial takedown is blocked but we automatically transition to a new offensive move and still end up scoring. Maybe I shoot for a single leg and am stopped but then I immediately hit a peek out and still come around behind to score my two points.

Chain wrestling is important on the bottom too. If my sit-out is stopped maybe I can transition into a stand-up and escape from there.

Leverage and Being Mean

Sometimes leverage is a big key to making a move work well. Run a half nelson or an arm bar straight over the top instead of the traditional way and see what happens. Grab your opponent’s chin on a half nelson to make it really tight. Make your opponent uncomfortable and he’ll move in the direction you want or just give up. Former NCAA champion Wade Schalles pinned numerous opponents during his career and knows a lot about leverage and making opponents uncomfortable.

Former NCAA champion Zack Esposito describes the top position and states, “You know what? Wrestling’s not a tickling contest. It hurts like a mother when a guy gets two legs in on you. So why not let’s crank on his shoulders a little bit.”

He also states, “Because that’s what top is. It’s frickin’ mean. You’re mean on top. Because if you’re not mean on top, you’re not gonna be able to ride. The best riders were the meanest ones.”

He continues by stating, “When I get a wrist, I’m gonna try and break your shoulder off. That’s just how it is.”

You can learn a lot from Wade Schalles, Gene Mills, Zack Espositio, Ben Askren and other elite wrestlers about leverage and using legal discomfort to turn an opponent.

These are just a few examples of the knowledge elite wrestlers have that you may not. Hopefully you’re doing a lot of these things already. If not, then start incorportating these concepts into your wrestling and you’ll see a lot of improvement.

Tharin Schwinefus is a former high school conference wrestling champion and state qualifier. He maintains a passion and interest in all things related to the sport of wrestling. If you would like to read more articles about different aspects of wrestling then please visit http://bestwrestlingmoves.blogspot.com/.