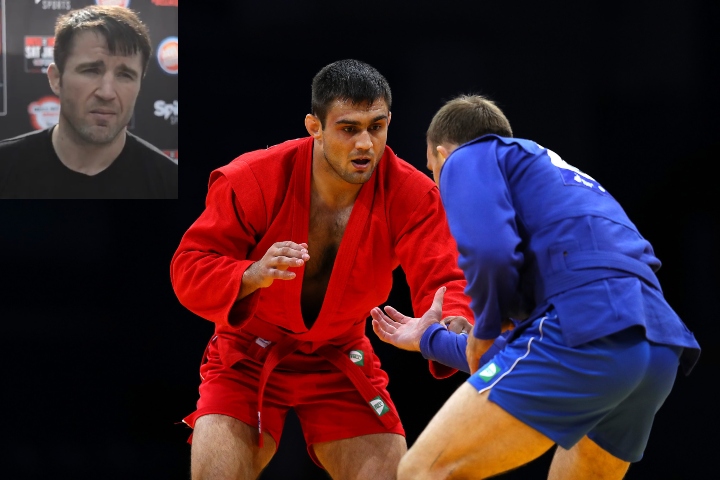 Who’d win: Brazilian Jiu-Jitsu or sambo? Well, Chael Sonnen offered an answer in one of his latest YouTube videos… And it’s the one you probably didn’t expect.
Namely, while discussing the probable outcomes of a Charles Oliveira and Islam Makhachev match, Sonnen said that he doesn’t believe sambo is real:

I’m not [sure] who can beat one or the other, but I do find it very fascinating if we do have a chance to bring high-level Jiu-Jitsu versus high-level sambo. For me, that’s interesting.
And I do know that the Jiu-Jitsu community, as a community, has been very scared to do that. I don’t know why… And I think Jiu-Jitsu wins. I don’t think sambo is real. I never have.

Sonnen does understand that Khabib and other fighters from Dagestan are saying that he’s wrong:

I think that there’s a reason that you can’t get a scholarship in sambo. And I think that there’s a reason that if you go to attend Olympic Games, that they’re not going to have a sambo village.
I don’t think that it’s real, but we’ve got a part of the world – headlined by Khabib and a whole bunch of badas*es out of Dagestan – that say that I’m wrong. And I do acknowledge that the Jiu-Jitsu community is very scared to find that out.

He shared an example of the BJJ community being scared to engage against sambo, from his experience in 2001:

I remember the first Abu Dhabi that I attended, it was in 2001, and it was in actual Abu Dhabi… It was nothing but a group of Jiu-Jitsu guys. They slipped one wrestler in there, who was Mark Kerr, who had a purple belt in Jiu-Jitsu… Who ended up beating them all, making them all look foolish.

But they also went ahead and inserted one sambo guy. So, one guy whose name I cannot produce because I never even knew it at a time, was 39 years old! Now, 39 years old in the year 2001 – we all called him “grandpa”. He was the oldest guy there.
He was this 6th-degree-something-dan in sambo, and it was Jiu-Jitsu’s way of organizing Abu Dhabi and saying: “Look, we’re better than anything, including sambo.

Which was really weird. Like, if you really believed that and you thought that there was a threat there, you’d invite a 29 year-old sambo star.