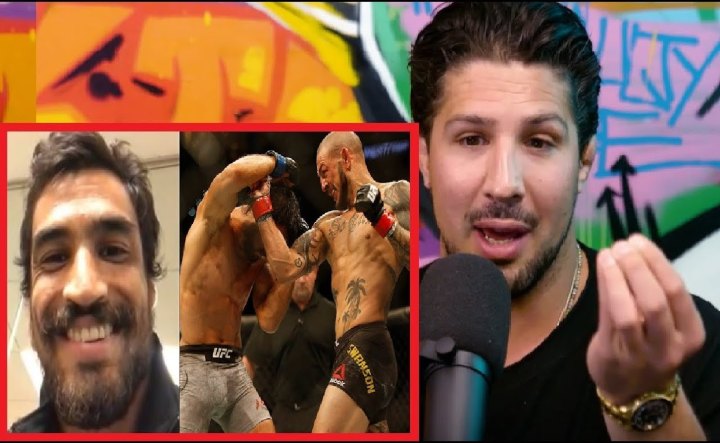 In his recent Below The Belt podcast episode, Brendan Schaub – a former MMA fighter and a stand-up comedian – has spoken, amongst other things, about Kron Gracie’s recent UFC fight versus Cub Swanson and why he thinks that matchup wasn’t a good idea.
Also, he went on to explain that if there were the worst skillset to specialize in the MMA, it would be – Brazilian Jiu Jitsu.

Brendan starts by saying that the Kron and Cub Swanson matchup didn’t make any sense to him whatsoever – that he hated that this fight had happened for Kron.
He agrees with some opinions that say that, sure, Cub did lose 4 matches in a row – but he still had a very significant advantage over Kron, with over 30 matches against the best fighters out there… Whereas Kron has only had one UFC fight beforehand. So, Brendan is weirdened out that, instead of letting Kron grow a bit, he was put on such uncharted territory in an early stage of his career. And it wasn’t as if he was fighting someone with very little knowledge of ground game, Brendan says – but he fought Cub, a BJJ black belt!

…OR MAYBE IT DID?

However, he says that he understands the contrary opinion, that says: „If you get into UFC, you better have all of the tools at your disposal.“ As a matter of fact, Brendan says that this is something he actually took out from a piece of advice that he received from the former Anderson Silva’s manager, Ed Soares, who told him that there are no „bad matchups“ in the UFC, because everybody’s tough. So, you either have the skillset to hold your own against your opponents, or you just don’t belong there. You should be able to beat everyone if you’re on the biggest stage.
Brendan explains that he does understand that perspective, but that he personally wishes that Kron had received a bit more experience beforehand.

Brendan also goes on to agree on the word that some BJJ gyms didn’t want to train Cub because Kron is a Gracie. He says that those sorts of things are due to a given BJJ community’s feeling of loyalty and that, sometimes, some fighters are seen as outsiders from that community – and thus aren’t helped out.
However, he explains that he doesn’t have anything against Jiu Jitsu being like that, harboring that sort of loyalty. On the contrary: he thinks it’s pretty awesome!

With a unique perspective, he goes on to claim something that he believes will shake the BJJ community a little bit: that he thinks that the one thing, which could be learned from the Kron Gracie vs Cub Swanson fight, would be that if there’s a „worst specialized skillset“ that a fighter could have when he enters MMA, it would be the Jiu Jitsu skillset. In other words, if a fighter were to specialize in BJJ, that would be the worst-case scenario for his MMA career.
Furthermore, he says that he would rather choose boxing instead of just having BJJ, and that if there could only be one thing to specialize in, that he would choose wrestling. „If you are a wrestler“, says Brendan, „you dictate where the fight goes.“

In conclusion, he gives his opinion that if there were a choice of specializing either in striking, wrestling or Jiu Jitsu for mixed martial arts – that Jiu Jitsu would be taking a third place on that list.

Watch the podcast insert below: