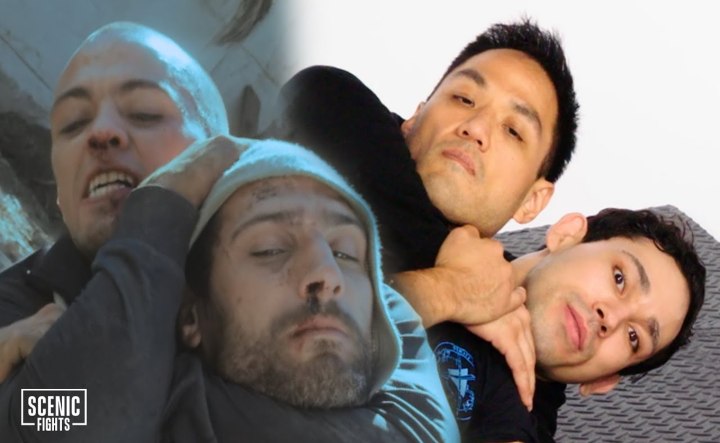 If you’ve seen the movie „Redeemer“ (2014), starring Marko Zaror, you’ve probably seen a lot of action shots that involve grappling skills! But, how realistic is the grappling we see in the movie?
In the new episode of Scenic Fights, Chad Vasquez – a BJJ black belt from Evolution Muay Thai – breaks down a couple of scenes.

In the first one, Marko’s opponent catches Marko’s leg-kick and drops him down with an Ouchi Gari.
Chad shows how this is done: after catching the leg, your first leg needs to step in and it is then followed with your rear foot – after which your front foot comes around your opponent’s leg for a takedown.

Then, Marko’s opponent uses his front (takedown) foot to come over Marko’s leg, sitting down with his feet crossed outside and with a figure-four grip over his ankle, leaning back to apply a footlock.
However, Chad mentions some of the improvements that could be made in this situation:

-Better grips could be used.
–Instead of crossing his feet outside, he could’ve gone into a classic Ashi Garami position.
–He could’ve fallen to his shoulder instead, bringing Marko’s heel to his backside – and then extending with his full torso to apply the ankle lock.

Marko then escapes the footlock by pushing his opponent’s leg over, after which he stands up.

Marko’s opponent moves on to set up the X-Guard, doing so by hooking Marko’s knee and stretching his leg out, after which he swings his top leg for some sort of a leg attack.

Chad demonstrates a better way to do the X-Guard: your top leg should be attached to your opponent’s hip, while the bottom leg hooks behind their knee.
There’s a better option for a leg attack as well. As he was stretching Marko in one way, his opponent could’ve dropped his bottom leg down behind Marko’s heel, using it to trip him and to then set up a straight ankle lock.

Moving on to the next displayed technique, the Ippon Seoi Nage. Marko’s opponent throws a big hook to punch him, which Marko blocks and sets his grips up for the throw.
Chad says that this could be a valid approach – however, it is followed by a quite unrealistic throw defense: a flip. From there, the fight is taken down to the ground by an inside trip.

Marko’s opponent transitions from Side Control to Scarf Hold (Kesa Gatame), from which Marko then rolls out into a Turtle. His opponent controls him at the hip there; after which he gets his hooks in and takes his back, starting to apply the Rear Naked Choke.
Marko decides well with his defense, Chad explains: he reaches for the opponent’s hand and peels it off. He then removes one of the hooks and rolls into his opponent to end up in closed guard.

SINGLE LEG TAKEDOWN, CRAB RIDE (!) TO BACKTAKE AND A TRIANGLE

In the next Redeemer scene, Marko’s opponent shoots for the Single Leg, which Chad says he does very nicely, and establishes control from the back. Marko responds well by pushing his opponent’s hands downwards in order to break the grip.

However, his opponent then does a cool inversion to Crab Ride, using it to take Marko’s back yet again. Chad demonstrates the keys to doing a Crab Ride correctly – all of which correspond to the way it’s been done in this scene.
Marko manages to roll out into his opponent, who then catches him into a Triangle Choke. However, he pays dearly for not controlling Marko’s armpit or leg, which Marko uses to stand up and slam him down in order to get out of the choke.

Watch the video below for more details and to hear the grade Chad has given to these scenes!