Advice For Beginners: Learn These Basics Of Mount Defense First 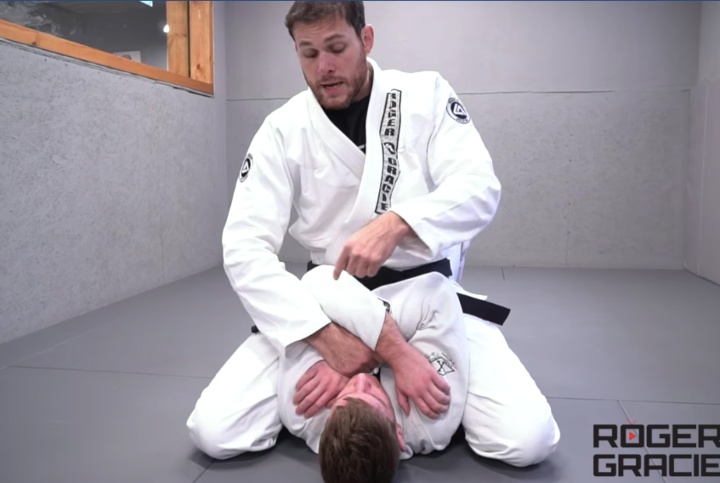 When you’re a beginner, absolutely everything is unexpected in Brazilian Jiu Jitsu! Most of the time, you won’t know what’s going on and what you should or shouldn’t do; you’ll be trying to attack when you shouldn’t be attacking at all and you’ll be defending in the worst possible ways.
One of the trickiest places you’ll find yourself in most often is under someone’s Mount. Let’s see the basics behind being in this disadvantageous position, with Andre Galvao.

WHAT HAPPENS WHEN YOU’RE UNDER SOMEONE’S MOUNT?

There are a couple of ways an opponent can hold a Mount. Andre explains that they can either High Mount you, where they’re high on your chest; or they can have a „standard“ Mount, where they’ll hook their feet to your legs or cross them.
Of course, your opponents won’t just hold this position. They’ll be trying to attack you, and they’ll do this by changing position. For example, they will transfer to the S-Mount from which they can Armbar. Or, if you make the mistake of turning your side towards them, the Z-Mount is theirs for the taking; that is, the Armbar, the Kimura and your back.

BJJ is all about forcing your opponent to make a mistake, so that you can use it against them. Therefore, it’s very important to understand which mistakes are most common for beginners – so you’ll stop making them.

For starters, don’t „defend“ yourself by turning your back towards the opponent. Being under someone’s Mount, while bad, is not as bad as having your back taken by them. You’ll be much more vulnerable if you can’t see your opponents, both in BJJ and self-defense situations alike.
Secondly, don’t try to submit the other side while you’re under their Mount. This is a defensive position; Andre shows that, in theory, you could set up a Kimura or a Guillotine Choke from here, for example. But you’d be very unlikely to tap them out – provided with the chance that they won’t previously intercept your attempt and tap you out instead.

In addition to that, remember not to extend your arm(s) towards the opponent. If you extend them, you’re probably going to get armbarred. So, keep your elbows tucked in to your body; if you need to push, push against their hips.
Also, don’t try to hug your opponent. You might think doing this would keep you safe. However, this is a very weak defense, even more so in self-defense situations where your face is now unprotected from the impending punches. If you need to hug something, let it be their leg.

THIS IS WHAT YOUR DEFENSE IS ABOUT

So what should you do? Andre explains that the basic thing about Mount defense is using your frames. These frames, in the form of your forearm and shins, will make it more difficult for the opponent to transition to Mount in the first place – and they’ll make escaping the position easier for you.
Essentially, as a beginner, Andre demonstrates that you should focus on getting your forearms in the way of your opponent’s legs; most preferably, underneath them. Then, when you see an opportunity, you need to either bridge so as to disturb their balance and make them post; or push them as you hip escape to one and then the other side. Whatever you do, your goal is to open up space – which you’ll then use to escape by either reversing position, getting away from them or by getting them in-between your legs.

Andre explains these and many other basic Mount-defense tips in extensive detail on the video below:

If you take moves like the bridge and roll from mount, the elbow knee escape from mount, the hip escape from side, these are old school moves and if you put time into them you can make them extremely effective at high levels. One of the best examples of old school guards and game comes from the 5x Black Belt World champion, Bernardo Faria. Bernardo has long been one of the best competitors there is. Although he is retired, he was able to solidify himself as one of the best competitors ever by using very simple “Old School” techniques.

Bernardo used the over under pass, the half guard, the deep half guard, and good old fashioned wrestling to beat some of the top competitors in the world time and time again. If you want to learn some techniques from him check out his new DVD set “Foundation of Brazilian Jiu Jitsu“ which is also available as a 6 part digital download. This set is one of the best examples of the fundamentals of bjj.