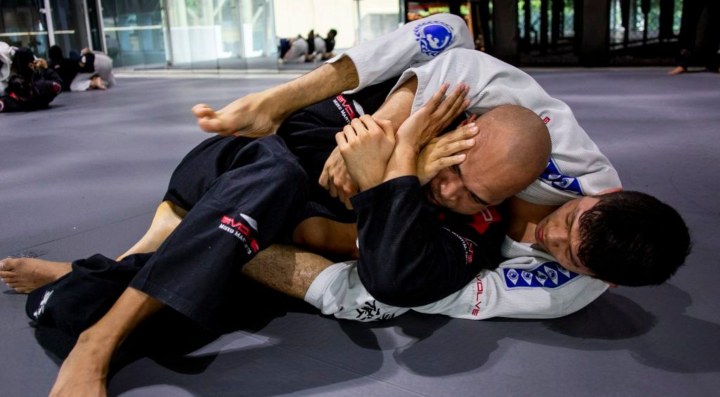 If you still aren’t really clear what sort of a gameplan you should develop and practice, then by all means let it be the one through which you’ll aim for taking the opponent’s back. Taking their back will provide you with a position which is almost entirely an attacking one… Most importantly, you’ll be able to hit your opponent with the Rear Naked Choke; arguably the most dominant submission there is.
However, it’s not just the RNC that you have at your disposal – there are other techniques that you can use to tap your opponents out. And guess what? The Armbar is one of the most readily available ones.

Coach Tom from The Grappling Academy demonstrates how to set it up.

If your opponent doesn’t defend the Rear Naked Choke, then great! Their neck is defenseless and you can slide your choke in.
However, if the opponent has any sort of a grappling experience, they will likely raise their hands up towards their neck to protect it. And that is when you’ll have an opportunity for the Armbar. This is an important point; coach Tom emphasizes that whenever someone defends chokes, they often give rise to armbars – and vice versa.

So, let’s see how he goes about setting it up!

LET THEM FLARE THEIR ELBOWS OUT

As coach Tom goes to slip his hand underneath the training partner’s neck, the partner has to defend it by pushing Tom’s choking hand down. When he does this, he flares his elbows out – which is what represents the Armbar opportunity.
Sure, you may think that this is easily avoidable; the training partner would just have to keep his elbows close to his body, right? But this isn’t too effective, at least not when your forearm is already reasonably deep underneath the opponent’s chin. Simply put, if they try to push your hand down while keeping their elbows tucked in, they won’t generate enough pushing strength and you’ll choke them out. That’s why they’ll flare out their elbows; this is a stronger position for their choke defense and an amazing opportunity for your Armbar attack.

Now, in order to make the transition from the RNC attempt to an Armbar, your top arm (the choking one) cannot stay around your opponent’s neck; it has to transition to the side of it which is closer to you.
However, this is a part of the setup where coach Tom says the biggest mistake happens. Basically, when changing the position of your arm, you might place your tricep muscle against the opponent’s head – this makes their job of turning into you, spinning out and putting you in a bad position that much easier. Don’t let that happen.

To set up the Armbar correctly, once the training partner starts pushing the choking arm down, coach Tom grabs his flared-out hand from underneath. This keeps it in place for a split second; just before he changes the position of his choking arm and grabs the partner’s hand at the same place, establishing a Kimura grip in the process. Notice how he’s blocking the partner’s head with his forearm.
From there, Tom shifts his legs to the side, one over the training partner’s head, and moves his thigh out of the partner’s way in the process; this makes him drop down to the mat. He emphasizes that here you need to end up at a 90 degree angle or less, or your opponent will be able to defend the submission much more easily.

Watch the full breakdown on the video below: