Escape Side Control Using the High and Low Road 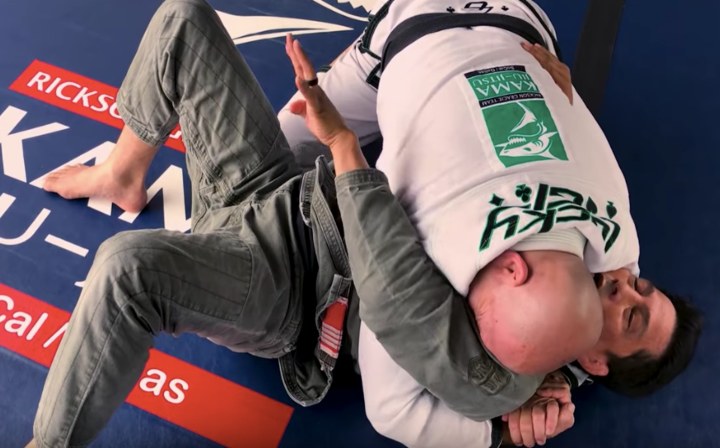 Side control is one of those positions that is just plain horrible. Our opponent can mount attacks, we can’t, they can stall and rest, we’re carrying all of their weight, and they torque their weight into our necks. Needless to say it is not fun to be in bottom side control. What is also discouraging about the position is they can rack up points on our escape attempts with re-passes. If you’re in competition in the absolute division as a little guy, this is the last place you want to be. Someone who is not very skilled at Brazilian Jiu Jitsu can dominate someone in this position simply because of how strong it is. There are two great ways to escape and we’ll be covering them today.

No no, the high road isn’t some big classy place where people dress nice and eat fancy dinners, it refers to the under hook escape! The under hook escape works great against bigger and stronger grapplers because it’s relatively easy to pull off on anyone of any size and it provides and instant path to the back. So where do we start? Well first things first, and this concept works in every bad position on bottom, we want to be on our side. If we are flat on our back we cannot escape and are on the defensive. Priority one when being in bottom side control is to be on your side. It is often MUCH easier said than done. We must do whatever it takes to get their whether it is “burrowing” in, shrimping, or just being tenacious we need to be on our side. I like to take my arm that is underneath the chin of my opponent and flair up strong with a bridge to do so. Next we need to get our under hook, hence the name of the escape. It is best to get in the transition of us getting to our side but if we cannot we need to flair our elbow and buck again. When doing so we want to lead with our elbow because if we lead with our hand it does not necessarily mean our elbow will fit and we can get squashed back down.

Now we need to get to a dominate or equal position, for this analogy think about working on a car and sliding out from underneath it on a trolley. We use the under hook we just fought for to slide on back to our opponent’s legs and get from underneath them. Next we build our base up and capture one of their legs in one of ours to get into what’s known as the dog fight position. There are tons of different ways we can finish from here but I’ll cover a pretty fundamental one.

Now that we are in the dog fight we want to bully our opponent into a dominate position. Simply step our free leg up and drive into them with all our weight. Next we pick out the far knee causing them to tumble, we pass by the legs and settle into a strong dominate side control.

There you have it, you just escaped using the high road

The low road is another easy escape and I recommend it to people with a great guard. It also works well against people who have a poor top side control game. You can regain your guard multiple ways. For instance, we can get back to a half guard and then shrimp out to a full guard, If our opponent isn’t sprawled out on us we can slip a knee through and spin back to our guard. However this is often not the case against someone who is good. Getting out of their side control requires much more effort. I like to use this simple escape against them.

First we need to build momentum to get them off of us. I start by walking my feet away and towards my head. Next I explode up with my full body and arms to create space. I spin back and fill the empty space with my guard which they fall into. It is much more common to see this escape and in my opinion it takes a lot less skill than the under hook escape.

If you have read my previous articles you know I stress prevention of bad situations. I would rather my guys work on retaining their guard while it is getting passed than to give up and end up in bottom side control. If they know the pass is coming and it is too late I stress to them to get on their side and already start to look for the under hook in transition to start working the escape. That is the difference between someone who is good at BJJ and someone who is great.

A cool little trick I like to prevent my opponent from settling into a strong consolidated side control is with the use of my skeletal structure to brace their weight. I will place one of my hands on their hip and the same elbow on the mat. Now they can no longer sprawl their weight on me because they would have to break through my bones and it uses very little muscular energy. This also leaves a space open for the low road escape.

Another reason we want to work on guard retention and preventing the pass is because at the higher level guys are so good at maintaining side control they will often get points for re-passing your guard in your escape attempts and we quickly will have to only focus on submissions to win.

Both of the escapes should be drilled out on a very regular basis along with the concept of staying on your side when on bottom and preventing bad scenarios from even happening. Let me know how they work out for you.