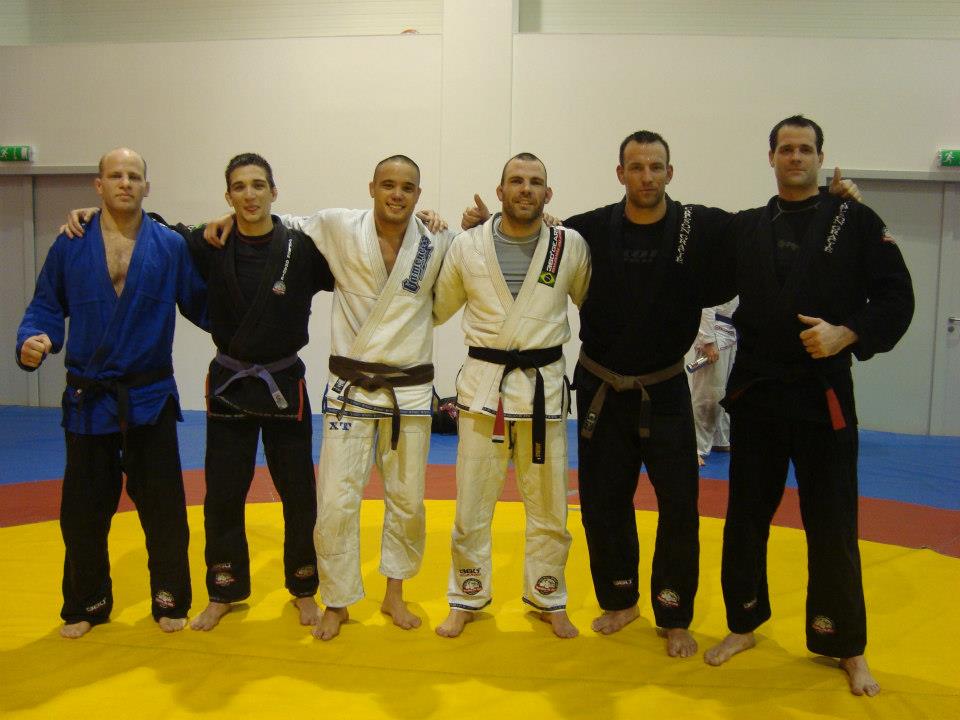 The first time that I encountered members of Carlson Gracie Hungary team was back in 2005 at the first Hungarian BJJ Open. I remember seeing loads of big muscled guys with shaved heads with Carlson Gracie Bulldog T shirts and remember thinking to myself that Carlson Gracie schools all over the world seem to produce the same kind of BJJ players: tough Mofos! Over the past few years I’ve encountered them at most of the Hungarian BJJ Open tournaments where they compete against their regional rivals Gracie Barra Hungary. Back in April 2009, I spent 2 weeks training at Carlson Gracie London, and Simon, Wilson and Dickie (the leaders of CG London) were telling me about their Hungarian brothers.

Fast forward, to January 2013, and my wife telling me that she wants me to drive her, her sister and her mom on a 2 day shopping expedition in Budapest. Being a good husband, I say sure but only under one condition, I get to train with Carlson Gracie Hungary while you buy useless accessories 🙂 It was a deal. So I contacted Gabor Fodor, one of the main instructors there and who I’d already interviewed in the past on the website and told him that I was coming. He was very fast in welcoming me and said that it would be his pleasure and that he’d available to train with me the next day if I wanted. Unfortunately, I was on a tight schedule so could just make it to one training. So the training was scheduled at 7:30 pm and he picked me up and we drove to a state of the art sport’s complex. “Tonight is white belt training, but I called the experienced guys so that you can have some good rolls.” Gabor said. That was a nice gesture. As we entered the huge gym which was matted with 4 huge wrestling mats, I noticed members of Hungary’s best wrestling team finishing their practice. There were about 50 wrestlers finishing training and 50 Jiu-Jitsu players in their gis patiently waiting for them to finish.

The guys were mostly white belts with a few blues and purples. Gabor introduced me to Ferenc Pajor, a large black belt, who I had seen a few times in competitions, and Gyorgy a large brown belt. I was to drill with them as Gabor would show the rest of the guys the techniques. After about 10 minutes of drilling sweeps and back takes from half guard. The 2 big guys and myself did alternating 3 mins rounds of sparring. First up for a few rounds was Ferenc Pajor, who moved extremely well for a big guy and he was playing a relaxed bottom game but was non stop going inverted and really had good “small man Jiu-Jitsu” once he would sweep me, his passing game was even better as he would pass my guard without too much difficulty. I would say that my guard game is my strong point but against him, it didn’t work well as he was able to pass me and when I would scramble away he would put amazing amounts of pressure on my face with the famous Carlson Gracie “shoulder of Justice” which is a kind of hardcore version of the cross face. Ferenc was smashing me but was surprisingly gentle and took his time to smash me. It wasn’t brute force, it was pressure and experience.

I then rolled a couple of rounds with Gyorgy, the big brown belt. He had a excellent bullfighter pass (torreando). His grips were almost impossible to break. I thought to myself, that he must be a judo player because that is an insane grip. He was  also able to pass my guard thanks to his heavy hip pressure. He was tough but just like Ferenc, he was not brutal, more calm and composed. After rolling with him, Gabor told me that Gyorgy was a Hungarian and European National Judo Champion who was in the national team and was a rival of the World and Olympic Judo Champion Antal Kovacs. It made me feel better that the guy that had just kicked my butt had some serious grappling credentials. Next up was rolling with my friend Gabor Fodor, black belt. Gabor also had a distinctive Carlson Gracie smashing top pressure style, I was mostly playing half guard, and could sense by the way that Gabor was holding my foot that he wanted to tap me with a toe hold 🙂 We were rolling some more and his balance and heavy top pressure style was impressive. It was a bit like a vintage Wallid Ismail style. By then, I was already pretty tired and I asked one the purple belts to roll. Gyula Szabo, was a guy that had caught my eye at the last Hungarian Open, as he had beaten my team mate and his guard game had really impressed me. I was in his open guard and was not doing much, just blocking his non stop guard attacks. He has the kind of style that is really tiring to defend as he is non stop attacking from the bottom, with de la riva, reverse de la rivas, tornado rolls etc.. Toward the the end, I was in his closed guard, he has holding me down, and he caught me with a really sneaky variation for the Ezekiel choke from the guard. I had never seen this variation before and I asked him to show it to me after. It’s a great move, and I will try to add it to my arsenal. The last roll was with a blue belt whose name I forgot but he had serious strength and great base as well.

Training was finished and we posed for pictures and filmed a technique that Gabor showed. The technique will be up this week on the website. The guys were super friendly and really made me feel at home. Gabor even gave me a free Gi from tacticalshop.hu which they produce! Super nice.

Gyorgy, the brown belt drove me back to the hotel and we had a nice talk about how he had retired from Judo at the age of 27 when he felt that he din’t want to train for 4 more years to try for the next Olympics. He had decided instead to focus of his business career. This was very interesting to hear how a world class athlete went from training 2 x a day to working a normal 9 to 5 job and focusing on career and family. Gyorgy said that he was happy to have found BJJ as it was not as hard on the body as Judo was and that he could train 2-3 x a week and have fun.

I’m glad to have trained with such nice guys and look forward to future trainings with them!