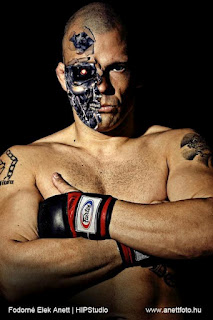 1.Please introduce yourself to the BJJ community of Eastern Europe

My name is Gabor Fodor, I am 36 years old, from Budapest, Hungary. I am a BJJ black belt under Mihály Sztraka (1st degree Black Belt under Carlson Gracie Jr). I’m learning and teaching our precious Gentle Art at Carlson Gracie Hungary, Budapest. I have won Gracie Invitational in blue belt division, Bristol Open, when I was purple, Hungarian Open, I got two silvers and one bronze medal from European Open and some silver and bronze medals, from London Open, Hungarian, Gracie Invitational and EFN in purple and brown divisions.

2.How did you start training Jiu-Jitsu? Please guide us through your BJJ journey

My father was a football player – in those times when Hungarian football had value 🙂 – so he always tried to show me the beauty of football, but soon I had to realize that it was not my way. I was not born for that. Since 9 years old beside school and later work I use to go for my actual trainings, I was always a hyperactive kid. Later on in 1998 I met Mihály Sztraka, who taught muay thai in the same gym where I use to go at that time. He was greeting me gratefully. His name was already known  in those times, so I was pleased to learn from him. He taught me everything in full contact and made me a champion (in Hungary) similar to his other students. It is not an exaggeration for me to say that he is not only my coach but like my older brother as well.
He was always looking for that thing that “really works”. The first UFC fights had just appeared on VHS videos in Hungary. Around 2000 he went to the U.S.A. to train with Chris Brennan (Mihály was his Muay Thai instructor, preparing him for his King Of The Cage world title fight)…that was how the first ground fighting based mma team was born in my country.
Two years later my master just met, through one of his student who was living in London that time, Wilson “Junior” Cretaro. He was the person who founded Carlson Gracie London and in that time he was a brown belt. So these two excellent persons started to work together… Since 2002 there is BJJ in Hungary : Carlson Gracie Hungary.
As years passed by, there was no question what I wanted to do for my life: Jiu-Jitsu.
The technical knowledge is not enough. What Maeda left for us is the lifestyle, the values. I would like to represent and teach Arte Suave, if there is a need for that until I can.

3.How is BJJ is developing in Hungary, and how popular is it?


It is becoming increasingly popular in which the competitions took great part in the country (Hungarian BJJ Opens, no gi competitions and the first ADCC this year).
In the past few years, many competitors and leaders of different kind of sports started to train with us and get infected! Several years the traditional Ju-Jitsu Association organizes high quality competitions, plus we have FILA grappling championships aswell. And this all together improves the level.
We can say that there are a minimum 8 or 9 competitions in Hungary every year.

4. What can you tell us about your academy in Budapest and about your most successful students?

In the last three or four years it was really hard for the academy to grow because of the crisis. But this year we were able to open CG Pécs and CG 360 team, and working on Győr aswell. We are going to make seminars this year, at least one per month. So it is getting better, we are growing.
Honestly I could name many guys that are successful…
One of my best friends, Péter Gerő. We got our blue, purple, brown and also the black belt at the same time. He is the most technical at the academy, and for sure he represents top level in the region!
Our two other instructor, Ferenc Pajor and Balázs Füstös. Both fighters and teachers, with serious medals even from European and others. Ferenc has great guard and I seriously hate fighting his guard.
György Kosztolánczy: brown belt in BJJ, Judo blackbelt and world champion, many times hungarian champion…(Man, after a rolling with him, you will know what it means to get pressured!)
Ottó Aubéli: Olimpian in freestyle wrestling, became real serious in gi also! Killer guardpasses!
Zsolt Burda in purple belt: 9 times undefeated MMA fighter, most of them in Holland. He is also dangerous, real real good in no gi!
And the newest champ, Gyula Szabó: unbelievable flexibility,with his real bulldog heart. He wont stop only because of a much bigger guy. Member of the National Grappling Team. Many gold and other medals and he just won the ADCC hungarian with flawless! He will start to teach a BJJ based MMA class at Budapest, to experienced fighters.

Rickson! Pure old school Jiu-Jitsu, with out of any flash, only with million submissions.
Fabio Gurgel! Greatest of the Masters. Unbelievable sweeps!
Jean Jacques! NO COMMENT! NO DOUBT!!!

7.You are very close to your teamates at Carlson Gracie London. How important is your partnership with them?

Yes! When Wilson established CG London, they had around twelve members. Several times, some of them came over to learn from Mihály, and of course my master and Wilson many times met to work on, sometimes in London, other times in Budapest. So also we and our London brothers felt that we are in the same doghouse from the beginning. As years went by, this relationship became more deep; I have spent several times days-weeks, staying at one of my friends house. We’re learning, we’re competing, we’re fighting together.

8. Do you think that the Carlson Gracie style of Jiu-Jitsu is more aggressive and top game based than other schools or is it the same as others?

You should always ask my opponent! HAHAHA
You know, I believe in the way, as my master says, and Carlson Sr. taught: get position – go for submission. In a fight, you have to control the guy, forcing him to play your game, to be defensing and tap! In going for dominant position against my opponent’s wish… it can look aggressive maybe.

Toe holds … Seriously: I’m not the fastest and neither the strongest in my weight. Especially comparing with a smaller and faster or a bigger and stronger fighter. If somebody can avoid me to take pressure on him, cause of speed or body strength, I also try to catch the foot.
I also like armbars, keylocks and wristlocks from top.

Toreanos (Bull fighter pass) . I want to do it as sharp, as overwhelming as my master does it! Some of our guys says, my speciality is knee on the belly. For sure, in guardpasses I use them a lot.


Our plan is to start Carlson Gracie teams in every region in Hungary, and increase the number of infected mates (members).
My next dream is to compete on the Masters & Seniors in Rio. God help me to collect the money  But the most important for me, is to teach the “next generation”, getting new students, showing them what does it mean, TO LIVE BJJ!

12.If you want to thank somebody please feel free

Thank You my Master, for keep teaching , and for never stopped believe in me! For your infinite patience!
Thank You, Lord, for make me able to play BJJ!
Thanky You, my sweet Mother! We will meet again!

and BJJ Eastern Europe, thank You so much for this great honor! OOOOOSSSSSS