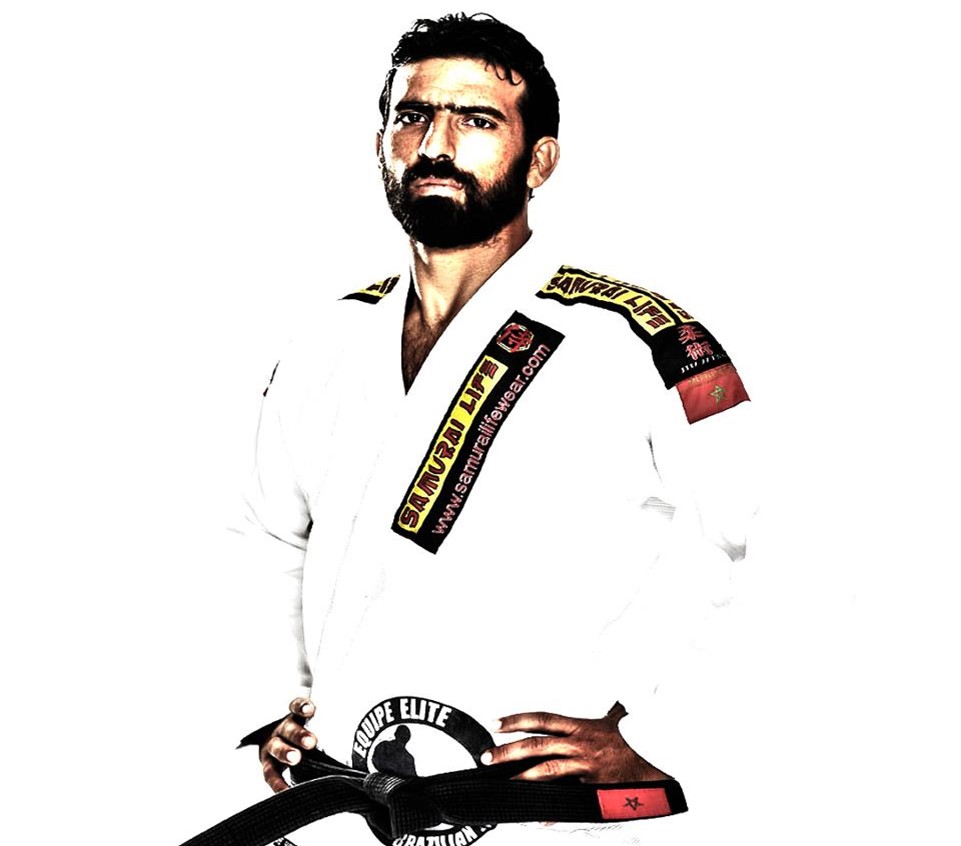 1. Hi Hicham, can you please introduce yourself to the BJJ Community of Eastern Europe?

My name is Hicham Hakam i am 35 years old bjj black belt under David Vieira da silva (2nd degre black belt). I live in Casablanca, Morocco running my team Equipe Elite in Casablanca and different parts of the country .

Hicham training in the States

My “BJJ JOURNEY” began early back in the 90’s discovering like almost everyone the power of jiu jitsu during the first UFC I was still living in Morocco at that time and the search for a jiu jitsu school went in vain given that they were absolutely no schools teaching that style anywhere. I was a martial artist in different styles (taekwondo, aikido and full contact) since the age of 5 and I quickly realized that jiu jitsu was the style that i would rather learn to complete my whole combat knowledge . It was only after that I travelled to the US in 1999 that I was able to quench that jiu jistu thirst i had in me from years before. Living in new jersey, I started training in a small neighborhood academy run by a blue belt at that time specializing in NHB style and grapping hence starting to know about the grappling and mma lifestyle.  After moving to New York city , I went and joined the Rigan Machado academy under his 3rd degre black belt Marcos Santos. While there, we had the pleasure also of having Ailson “Jucao” Brites as a teacher who joined the team and started giving classes there. During most of my bjj training that I did in the united states, I have met a tremendous amount of bjj and mma celebrities that passed by our academy and shared their precious knowledge, but that doesn’t go without travelling many many times to Brazil and discovering different styles and schools in Rio De Janeiro, where i was training under Carlson Gracie black belt Anselmo Montenegro. I moved back to Morocco in 2007, and my only goal was to develop the sport of jiu jistu in my home country and share my experiences. The idea of forming a team starting blossoming in my mind, and I started teaching at some local clubs with small groups slowly “advertising” the new style. After gathering all the ingredients , Equipe Elite was officially created in 2009 where me and my students established our gym headquarters and started to grow . As I mentionned earlier our team is proundly affialiated to David vieira da silva 2nd degre black belt. I met david through a friend and teacher called Soufiane Hammoud who is also a bjj black belt in France running the Shinko jiu jitsu team in Paris. David is the kind of person that you want always have around , either jiu jitsu wise with his technical knowledge and teaching but also as a person he is fun to be around. I recently received my black belt from him during his last visit in April 2012, making history and delivering the first black belt in Morocco (Moroccan based) and north Africa alike .

Who wouldnt dedicate their life to jiu jitsu if they had a chance? I don’t know anybody who wouldn’t. I had a chance to create a team surrounded by good people and students who followed me all along through good and harsh times, but our work and dedication has given us great results so far, making our team the fastest growing team in Morocco.

4. Please tell us about the History of BJJ in Morocco and North Africa. How is the current BJJ scene and how do you see it developing in the next few years?Do you think BJJ could become as popular here as it is in the UAE where it is taught in scholls and to the army?

Lack of instructors in the whole area makes it difficult for bjj to develop. I am still the only black belt living here in Morocco. I’m trying my best to accommodate everybody as possible by giving seminars and forming people who will one day become instructors also. We still have years to go before seeing many clubs and teams develop here. We all know the process we, bjj players, went through to get to certain level. The many years of training , the many injuries we endured , let alone the inevitable “cauliflower ear” we get. This is jiu jitsu… nobody should ignore that learning bjj is not simple , it is not just about knowing the move , it’s also about the combative aspect of it that revolutionized the world of martial arts. Bjj is already popular here in Morocco and North Africa, although lacking instructors, the terrain here is still “virgin” and everything to be done here is going to be beneficial in the long run.

5. Please tell us about your experience training in the USA and Brazil (who did you train with, what did you learn etc….)?

As mentionned earlier most of my training I did in the US under the Machados , the occasional long travels to Rio, Brazil also helped with my experience and knowledge , making my style a diversified style that gets the best out of everybody and combining it into a new kind of game play.

6. Please tell us about your academy in Casablanca. How does it differ from other BJJ academies?

Equipe elite headquarter is in Casablanca, and currently is present in 5 different locations across the country. Our team is proudly working towards spreading BJJ through the country among kids and adults We organised in fashion where nothing is random. Our training program is geared towards forming strong athletes technically and physically.

Oh , so many to mention , but my top bjj player is Lucas Lepri!  If you notice closely his style is about taking everything from you and not giving anything back. Through his many fights, I’ve seen that he is the type of person that is well rounded. He is good anywhere, top, bottom, stand up making him a complete fighter and tough opponent to beat.

8. Do you get many visits from Moroccans from France, Holland, Uk etc…who train BJJ there? How is the training with them?

Every month we get visits from abroad like Spain , England , US , France , Belgium , even UAE , Kuweit… Training with them is always beneficial for us. They also discover that we also can claim to have a real bjj academy in Morocco. I get to know cool new people as the bjj tradition wants it and establish new contacts and good friends that share their experiences with me and my students .

9. What did you think about the Metamoris Pro event? Do you like these rules as compared to IBJJF?

Metamoris is the event that reminds of what jiu jitsu is all about , except for the clowning around of some of the people there ,forgetting the essence of jiu jitsu and making look like a circus. I was deceived by some statements said during and after the event , and was totally impressed by many others like Xande , Kron , Otavio Souza and the glorious Buchecha who litteraly used a superpower combo you see a superhero do in catching the great Roger Gracie in an armbar.

10. How would decribe your style of Jiu-Jitsu? How about your teaching style?

My jiu jitsu style is a modern one , backed up by strong and solid basics that makes it easy to learn new things and explore new possibilities. I tend to try different things and drill them a lot and only adding the effective ones to my weapons inventory. I am not easily impressed by new techniques.  So many things I’ve seen unfortunately do not and will not work . My teaching style is studied in a way where we put the accent on both stand up and ground fighting making my students both actively in any situation given.  Conditionning is also one of our greatest asset leveling up everyone to using their full potential.

Surfing with his Gi

After all these years of hard work , me and my teammates are ready to go for war and medal hunting , stay tuned you are gonna hear about us in the near future “INCHALLAH”

13. Thanks Hicham and all the best!