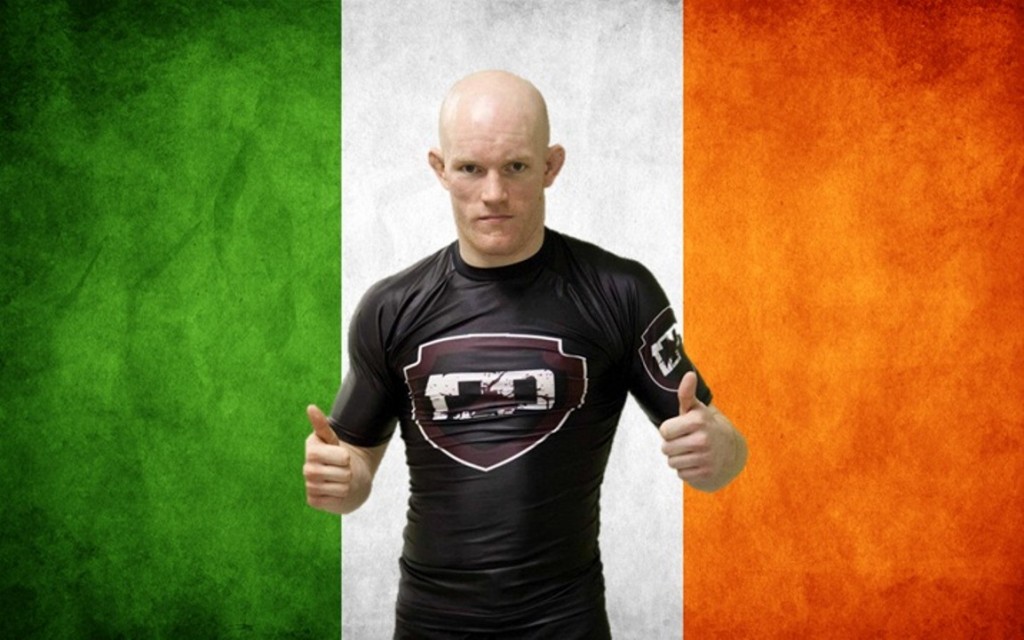 Darragh O Conaill is one of the most exiting brown belts in the world. In this interview with BJJEE.COM Darragh talks about his experience at LLoyd Irvin’s brown belt Kumite, the BJJ scene in Ireland, Training with the Ribeiro brothers and Rafael Lovato Jr and the competition mindset.

1. Darragh, can you please introduce yourself to the BJJ Community of Eastern Europe?

I first tried Jiu Jitsu when i was 16. At my school they had a Martial Arts module for a year where we learned various bits of kickboxing and nogi jiu jitsu. However, for the next 2 years i played on the school rugby team and had no time for other sports. I then when to college and continued to play rugby for my first year, but my interest was not the same as when i was playing in school because i was no longer playing with my friends so i stopped. Wanting to keep fit and still play a sport i remembered i had enjoyed jiu jitsu and joined the academy that my teacher from school ran.
I trained with him for close to 3 years training mainly nogi, earning my blue and purple belt. He eventually decided he no longer wanted to run the academy and asked me if i wanted to keep it going. The school was small (roughly 30 students) but i knew if i worked hard at it, it would be my chance to pursue training Jiu Jitsu full time. I began to teach classes, but more importantly i began to travel to further my training and knowledge of not only Jiu Jitsu but how to run an academy.
In 2010 i travelled to San Diego to train at Saulo and Xandes University of Jiu Jitsu in San Diego. The training there at the time was like nothing i had ever seen. The Worlds camp was just beginning and there was so many World Champions and faces i recognized from following the sport, Xande, Saulo, Damien Maia, Kron Gracie, Rafael Lovato Jr. Justin Rader to name but a few. I really enjoyed the intense training atmosphere there and the level was higher than i’d ever experienced. I returned again to train their for the summer of 2011 where i received my Brown Belt from Saulo and Xande.
Through the Ribeiro Jiu Jitsu team i had heard about and met Rafael Lovato Jr. My team mate Johannes Wieth had trained in Oklahoma with Professor Rafael and spoke so highly of the training that i knew this had to be my next place to visit. So this summer past i spent close to two months in Oklahoma training and competing with Team Lovato.
A few weeks ago i was invited by Lloyd Irvin to compete in the first BJJ Kumite where i also got to spend a week training with his team. Which brings me to where i am right now!

3. Please tell us about the History of BJJ in Ireland. How is the current BJJ scene and how do you see it developing in the next few years? Who are other top Irish BJJ players and trainers?

has actually been around for a while in Ireland. Our oldest club (as far as i’m aware) Athy BJJ, began in 1995! Two of the main pioneers of the sport John Kavanagh and Andy Ryan (Irelands first 2 Black Belts) began small training groups in garages and various places and through a lot of passion and hard work, began growing what is now a scene with academies and teams all over the country!
I see the scene here growing more and more every year. There is now close to a tournament every month, and although they may be small they are growing all the time. This year we held the biggest Irish Open to date with over 300 competitors. People in Ireland love Jiu Jitsu and there is a great community and passion for the sport here. I can only see more growth and bigger tournaments in the years to come!
In terms of other Irish BJJ players, we have very few higher belts but my good friend and training partner Chris Bowe is an Irish brown belt to look out for!
I also have several students in the lower belts who have had amazing years. Blue Belt John Sheridan took Double Bronze at the Nogi Europeans and just qualified for the ADCC Pro while taking 30 plus medals in regional tournaments. Sam McNally became Ireland’s youngest (and my first) European Champion earlier in the year. So them, along with a bunch of other soliders i’m preparing are the ones to watch from Ireland in the future!!

4.How much do Saulo &Xande Ribeiro and Rafael Lovato Jr have an influence in your personal BJJ game?

All of them have had a big influence on my game in different ways. Saulo’s aggressive style and mindset combined with Xande’s composure, sportsmanship and incredible use of defensive frames are things i try to emulate. My biggest influence now comes from Rafael. He has been to my academy 3 times in the last year and has helped me and my team so much. He has changed and shaped my passing game as well as my mental game. A lot of my guard is influenced by Marcelo Garcia, so i really have a broad range of influences!

5. Please tell us about your academy East Coast Jiu-Jitsu Academy?

East Coast Jiu Jitsu Academy is located in South Co. Dublin and is a place for anybody, men, woman or children to come and enjoy the life changing art that is jiu jitsu! We have only been in existence a short time, but we have a strong focus on competition and our competition team has taken many individual and team titles this year. We now have 3 European Medalists, an ADCC Pro Qualifier and 4 of the UK and Irelands team titles. With a team of merely 10/15 people we managed to take the Irish Cup, Northern Irish Open, Grapplepalooza and UK Premier Team Titles this year and we have far bigger things planned for next year! Check out our website at www.ECJJA.com and if you are in Dublin make sure you come visit us to train!

6. How are you able to be one the best brown belts in the world, whilst training with lower belts in your academy in Ireland?

A lot of hard work! I have Jiu Jitsu in my mind every minute of the day. When i am not training, i am constantly thinking about it, obsessing over it, reading books, watching technique videos, watching matches. I think this is very important. A lot of people may have big teams with lots of black belts to train with, but they don’t appreciate what they have and when they leave the academy jiu jitsu is over for them. I never had regular higher belts so whenever i had the chance to train or learn from somebody of a higher level i really appreciate the information and spend a lot of time studying it and implementing it. Traveling to different academies to train and competing regularly has made a big difference for me too. This puts you out of your comfort zone and forces you to learn about your game much faster than someone who is stuck at the same gym for years and never competes. Lastly anyone who knows me knows MGinaction has helped a lot! haha

7. Would you be the same Jiu-Jitsu player and enjoy training as much, if you couldn’t compete so much?

haha this is very hard for me to answer! I love competing so much and i plan to do so for as long as physically possible. I believe you excel and learn so much more about your jiu jitsu and self through competition. BUT, if i had to stop competing for any reason i believe i would still love training and teaching just as much!

8. You recently were involved in Lloyd Irvin’s brown belt Kumite. What were your impressions from training at TLI and their facilities and team mentality? Please tell us in detail about your experience at the Kumite

This was the best experience i have had so far in my jiu jitsu career. Getting to compete in this event was amazing and like nothing else i’ve ever done. Firstly, training at Team Lloyd Irvin was an eye opening experience in and of itself! The facility was incredible, 3 floors with endless mat space and equipment. The team train at an intensity i have never seen before. But, contrary to a lot of common perceptions, the team were some of the nicest people i’ve met. Everyone was super respectful, friendly and helpful during my time there and i would recommend training there to anyone! The mentality they have is not necessarily “special”. I have seen coaches and instructors with driven mentalities before but what impressed me was that the whole team had this mentality. EVERYBODY is extremely driven, disciplined and most importantly the energy is 100% positive, not just one or two star students. Their is no messing around or “bitching” during practice. Just good, hard training. Although i never wrestled, i would compare it a lot to a wrestling team. Most jiu jitsu schools train quite relaxed, a couple of reps here and a round or two there. Team Lloyd Irvin train like a professional team. Lots of intense hard drilling, a lot of discipline with no excuses and super fast paced, intense, technical rolling.
The Kumite itself was incredible. The no time limits or points really made me think about jiu jitsu in a different way. We are all so used to fighting in points tournaments that often we can forget about the other aspects of our art/sport, this tournament certainly proved to me (and hopefully others) that their is so much more to jiu jitsu than just scoring some points and holding someone down. Also, having to fight multiple no time limit matches in a round robin format was an extreme physical as well as mental test. Going back day after day for multiple matches regardless of whether you win or lose your first match is something we all experienced for the first time, but something i feel we all enjoyed. I hope that it is a catalyst for more tournaments of this style as i think this format is a really good thing for jiu jitsu! The show is going to be great so make sure you all check it out once it’s released! Massive thanks to Lloyd Irvin for the opportunity and chance to be a part of it.

Me and my team will be heading to the European Championships in Lisbon at the end of January. I personally hope to hit all of the major tournaments this year, so Pan Ams and Worlds for sure and any regional IBJJF tournaments in-between!

10. If you want to thank some sponsors, feel free. Thanks Darragh and all the best!

Thanks to you guys for interviewing me and thanks a lot to my only sponsor Tatami Fightwear. The best Gi’s i’ve ever used and some of the nicest people i’ve worked with who genuinely love jiu jitsu! I would also like to thank my family who are the best i could ever ask for. They have supported me whole heartily from the very start and have always encouraged me to follow my dreams!