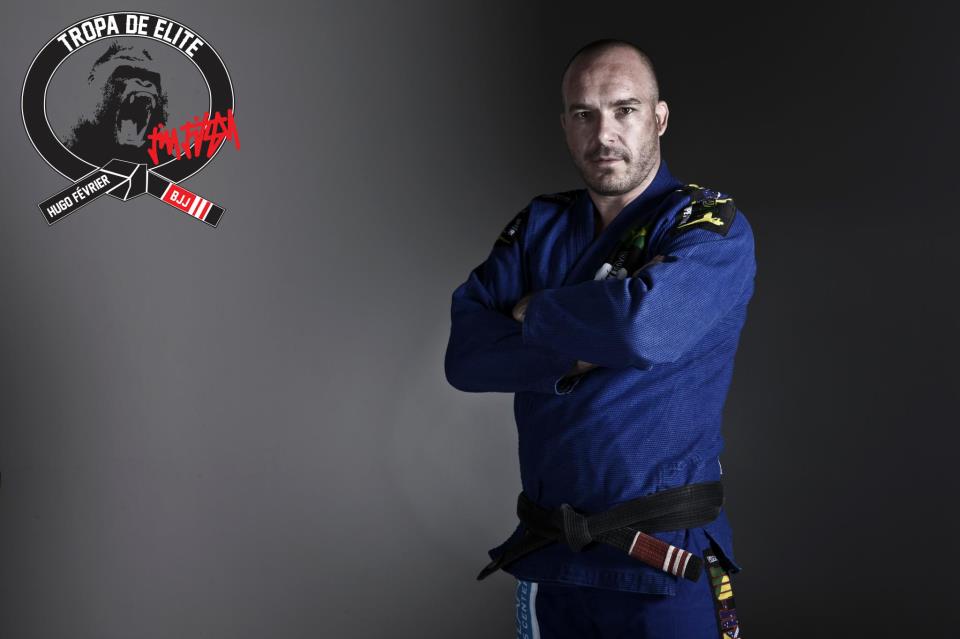 French BJJ black belt Hugo Fevrier, is part of the second generation of French BJJ Pioneers. He started training in the late 90’s and never looked back. In this interview with BJJ Eastern Europe, he talks about his history with Alliance, how he started his own team, his crushing style of Jiu-Jitsu, and some rolling concepts that you will find useful:

1. Hi Hugo, can you please introduce yourself to the BJJ Community of Eastern Europe?

My name is Hugo Fevrier,38 years old, BJJ Black belt 2nd degree. I’m french from north of France , now living in the south of France . I run my own BJJ team named Tropa De Elite. My mains titles are 3X European Champion, 3X Silver medalist at Europeans, 3X bronze medalist at Europeans ( in differents belts from white to black and weight and absolute); French Champion NoGi ( weight and absolut black belt) and many other titles gained all around the world. 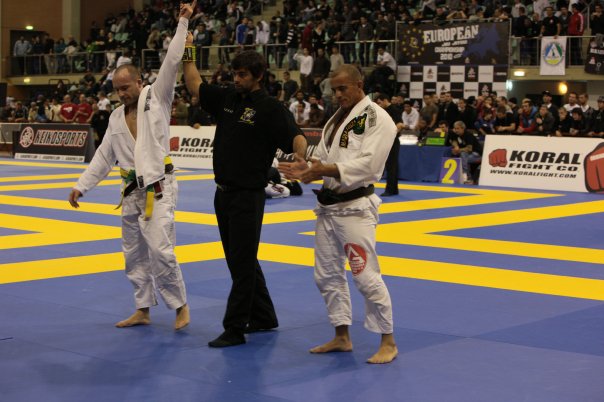 15 years ago,before knowing BJJ , i was training Capoeira in Paris, and after like 1 year, our professor asked us if we would like to go to Rio de Janeiro , Brazil, to train in the favelas . After a huge yes, he explained us that in the favelas when you take someone down, you keep going on the floor with grappling (BJJ). So we started training BJJ Nogi and i felt immediately in love with the “arte suave”. So i looked for a BJJ academy and i found one run by a judo black belt, newly promoted BJJ blue belt by Rickson Gracie. This was the beginning of BJJ in France. Then i started to travel to Brazil as much as i can to learn . I’ve been there 12 times. At that time , “gringos” weren’t welcomed in most of the academies, but when i stepped in the first time at Alliance academy run by the one who became my master and mentor : Alexandre “Gigi” Païva , it was the first academy where i felt “at home” with a really friendly welcome from everybody( and i’ve tried a lot of academies!!).

3. How did you decide to start your team Tropa de Elite ?

I had been training and fighting under Alliance team for 11 years , becoming the first french black belt from Alliance in 2005. So after many years with them, the affiliation policy changed and i wasn’t able to continue with them (regarding money). So unfortunately and sadly, i had to leave’em, but Gigi is still and will always be my master. I have such a big respect for him , as a teacher but also as a person. Then after that I decided to create my own team because i didn’t want to be affiliated with another team where i didn’t know anybody. The name of my team came from a Brazilian friend of mine Bam-Bam. I was looking for a strong name for my team , in Portuguese of course. And my friend Bam-Bam gave me the idea of Tropa de Elite because my team was a bit like the BOPE ( the Elite Police Squad in Brazil) : we are like a family, very unified and we get lots of medals in competitions even with a small group. My team is not a big one, but we have really good results and i have only one “affiliated” ( partnership is a better word) team in Germany : AJJK run by Christoph Schadek. He’ doing a great job over there. I prefer to keep my team small but very solid. 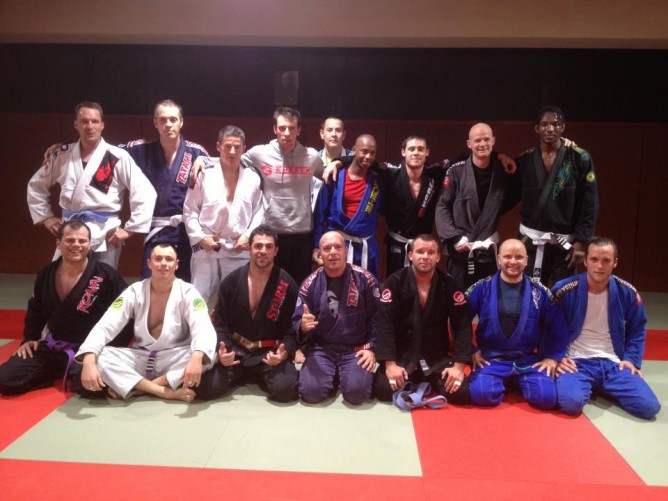 Hugo and his students from Tropa de Elite BJJ

4. Please tell us about your students and their accomplishments?

My students are doing very well!! Like i said i have a small team but with big results. From white to purple belt, i have several French and Europeans champions, and one of them finished third at Worlds . They win most of the competitions they enter.

5. You have a very specific style of BJJ where you fight quite relaxed and have a specific smashing style. Can you tell us more about the principles of your style?

Actually, lot of bjj guys told me that my fighting style can be compared to Saulo Ribeiro , which is a great compliment . Regarding the principles of my style , i remember someone who asked me few years ago :” what do you think I miss in my game to be better and more complete?” And I answered that you can see your bjj game like a ladder from 1 to 10 : most of the guys try to fight always at the same level (like 8/10) but for me it’s not the good way because you will not surprise your opponent. I think it’s much better to fight at 5/10 and when you want to sweep, pass the guard , etc… You explode and go for 10. And of course before exploding you keep relaxed.

6. You have been training with kettlebells and doing circuit trainings for a few years now. How has strength and conditioning affected your Jiu-Jitsu?

Yes, 5 years ago, i had the chance to meet someone who change my life : Fabrice Jaen. He owns a gym (Bodhitop) where conditioning is the leitmotiv and in France it’s not common. He is really passionate and the way that he trains you is great!! Since i met him, my physical condition has completely changed . And my bjj game has changed also because i feel much more comfortable, i know that i won’t be tired at all during a fight. So i really feel much more confident .

At first i would like to thank you Gile for the great job you’re doing for the bjj community, I know you for a long time now and i know you are very passionate about it. Then Fabrice Jaen for everything he did, he does and he will do for me. I’ve such a big respect for him, he inspires me a lot. My students also who help me training harder and harder . And two of the best black belts in France whom i try to train with as much as i can even if we’re not from the same team : Redouane Ait Said and Samuel Monin . And the last but the best : my lovely wife who supports whatever happens for the past 12 years now,and who gave me the most beautiful children in the world ( i know i can’t be objective ). My master Alexandre “gigi” Païva who is a great teacher, one of the most technical fighter but also a great human been. Also 2 of his students who helped me a lot in my bjj development : Orla jr Goncalves And Charlao Moura Da França.

8. Thanks Hugo and all the best!