Tom DeBlass Featured by Forbes Magazine: „As Long As You’re Resilient, You Can Do It“ 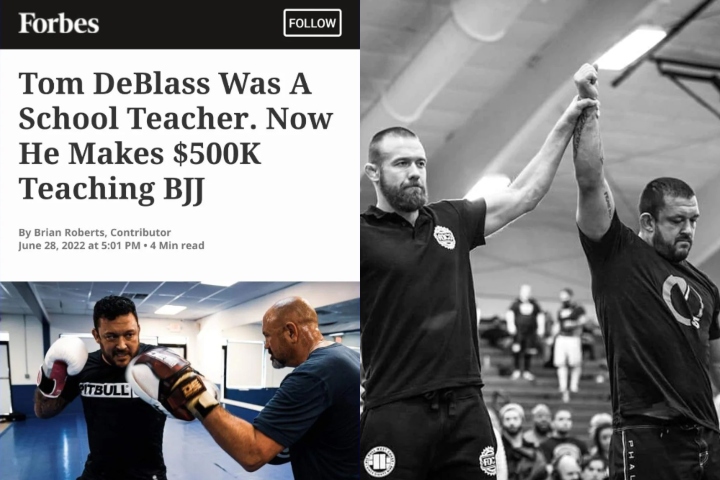 Effort, persistence, discipline and resilience pay off – just ask Tom DeBlass. Years ago, he opened up his first BJJ school as a brown belt (and after quitting his teaching job), charging $20,000 onto his credit card debt… And today, he has one of the most successful BJJ academies in the world!
What’s more, the prominent Forbes magazine wrote an article about Tom’s success:

Tom DeBlass earned $45,000 a year as a special education teacher in 2005. After his promotion to brown belt, he quit his teaching job, charged $20,000 onto his credit card, and opened his first school in an industrial park in Lacey, New Jersey.

He didn’t have enough money for a sign outside, so he put a sticky note on the door. Such a meager start would’ve deterred most. But DeBlass was determined. So he had to learn what worked and what didn’t–fast, lest he fail.
Sixteen years later, he makes $500k annually. Most of his income comes from his academy, Ocean County BJJ in Forked River, New Jersey.

As told by Forbes, DeBlass owes his success to resilience:

He hasn’t spent a penny on advertising in two years.

“Word of mouth has always worked best,” DeBlass said. Meanwhile, his marketing plan has been to be “open about his shortcomings.”
His transparency has worked: he’s amassed 300,000 Facebook and Instagram followers over the past five years. Six years ago, he had 19,000 of them. It took him 10 years “to become himself.” He didn’t start doing seminars until 2015.

“It’s never too late. I didn’t win anything until brown belt. Then I won everything,” DeBlass said. “As long as you’re resilient, and you’re disciplined, you can do it.”

Make sure to read the rest of the great article on the Forbes website.