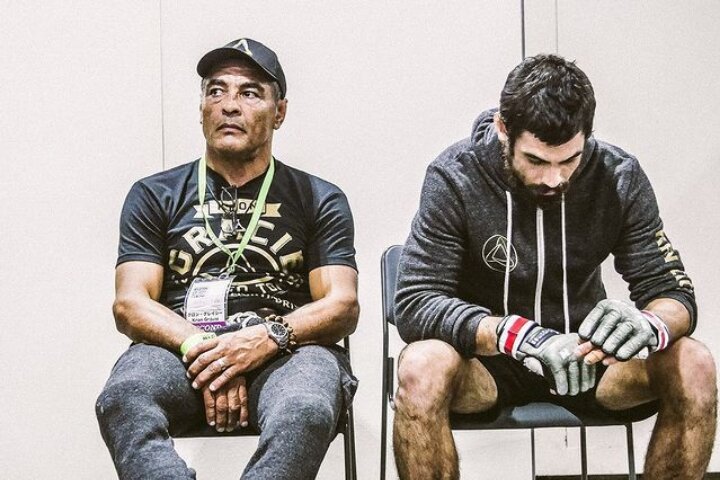 Kron Gracie has had his last MMA fight back in October 2019, when he lost to Cub Swanson via decision. His cornerman and father, Rickson Gracie, subsequently confessed that he wasn’t happy with how Kron carried himself throughout the fight.
In a recent interview for the Trocação Franca podcast, Rickson revealed that Kron was too emotional going into the bout:

You don’t have to be emotional when you fight, and I think Kron was emotional. He wanted to prove himself and to his friends that he could take a punch, that he’s not afraid of getting punched, that he wasn’t worried about using only one skill and delicate technique to win fast without getting hurt, keeping his face clean. He said: “I can prove that I’m a man, that I’m in this environment and I can brawl.”

He proved to himself that he has heart, that he’s brave and has cardio, that he can take the pressure, but I already knew that in my head. I know he’s an animal, he’s a warrior. What he showed me was lack of ability to work strategically on someone else’s weakness. I never liked clashing heads — I always liked catching someone when they were distracted, to surprise them.

I don’t like taking the toughest path, I like taking the door that’s open, the easier way to win. The quickest, the more efficient way, and causing less pain and trauma, the better. If I can beat the guy in 10 seconds in a way he doesn’t even feel pain, that to me is the best possible [outcome].

However, he still understands that MMA today is way different than it used to be back in the day:

It fills me up with pride because I see he’s following a tradition, a legacy, but the nature of the sport today is more physical than technical, more than one style only.
Everybody knows jiu-jitsu, everybody knows boxing, everybody cuts weight to fight… So it became more like a race, more physical and explosive and aggressive to the body. The training you do is very aggressive, the weight cut and diet are aggressive, and the fight has a lot of strength in a short period of time, so people aren’t afraid of getting tired because the bell rings before you get tired. It’s way more predictable, it gives the fighter a sense of control.

Even thought the outcome of the fight isn’t that predictable because they both work on the same elements, they will both stumble on the mud and keep pushing until they run out of fuel. It’s very intense, really. It’s not the same way I fought [back in my time], my strategy.
When I see Kron competing today, I don’t go there as a coach and say what he should do. I kind of follow and respect what he’s doing with his training partners, his methodology of training and fighting, which sometimes doesn’t please me.

Nevertheless, he doesn’t believe that Kron’s predominant strategy should be trading punches with his opponents:

Seeing Kron trade punches with someone, I don’t feel comfortable with that exchange. I’d never do that. But seeing him do that, I see he’s confident, he’s trained, and he wants to test himself.
Many times he [stops following] the perfect strategy to follow the ego and strength, training, competition, and that’s different from my views. I still don’t argue with him. I respect what he thinks and how he fights because the mindset and strategy are different today.