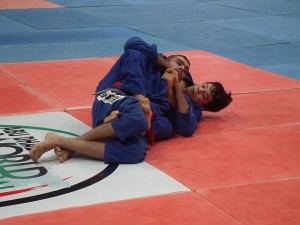 The rise of the Miyaos continues. Paulo Miyao, 21, the second half of the Brazilian BJJ phenoms the Miyao Brothers (with his brother Joao) was recently promoted to brown belt by his teacher Cicero Costha. Paulo won his first black belt tournament last weekend at the Abu Dhabi WPJJC tryouts in Natal, Brazil. The brackets were mixed brown and black belts and Paulo beat Nova União black belt Lucas Dantas.

“ It was really cool to have won this event, but now I want to train a lot so I’ll be in good shape for the upcoming tryouts and the main competition in Abu Dhabi. I tried to impose my game from start to finish. I didn’t make too many mistakes, but I will correct the ones I did so I’ll be better at the next competitions.”

About the fight with Lucas Dantas:

“It was a tough fight. He’s really strong, but thank God I managed to beat him. I’m going to compete at all the tournaments I can until the end of the year.”

To find out more about the Miyao brothers check out this interview with them that we did a few months ago: https://www.bjjee.com/articles/crazy-berimbolos-back-takes-and-leg-drags-meet-the-new-aces-of-bjj-the-miyao-brothers/