Crazy berimbolos, back takes and leg drags, meet the new aces of BJJ: The Miyao brothers!

They’re twins born on May 11, 1992. They started training in Andirá, Brazil with Professor Adriano Carvalho of Norte Sul Jiu-Jitsu academy. About a year ago they came to São Paulo because they had outgrown the training in their town of birth. “There weren’t that many people who took Jiu-Jitsu seriously there.”
Ever since arriving at their coach’s Cicero Costha’s acdemy they’ve slept on the mat and lived in the academy. And they’re not the only ones. Cícero Costha runs an outreach program called “Lutando pelo Bem” (Fighting for Good), where he takes in needy youths and provides them direction through Jiu-Jitsu. They go through three training sessions per day, as well as two trips to the gym to work out per week.
Their dedication is already paying off, with medals in major competitions as proof.
In 2011, João won the Pan-American Jiu-Jitsu Championship as a light featherweight blue belt. Two months later they closed out the light featherweight purple belt division at the Worlds, having already closed out the division at the Brazilian Nationals.
Besides that, they put in stellar performances at the Abu Dhabi World Pro Cup, where João won at blue belt and Paulo won at purple.

1. Hi Paulo and Joao, please introduce yourselves to our readers.
Hi guys, we come from Andirá, in the state of Parana, Brazil but we currently live in Sao Paulo. We started Jiu-Jitsu at 16 years old in our hometown, with Professor Adriano Carvalho of JJ North-South team. We then went to Sao Paulo and started training Barbosa JJ academy, where we met Professor Costha Cicero, with whom we train with today. I think our main title so far, was closing our division at the Worlds in 2011.
2. How much of an influence have the Mendes brother been in your Jiu-Jitsu? We love seeing the Mendes brothers fight, they really inspire us not only the professional side, but also on the personal side.
3. Please give us more background on Cicero Costha – how is he as a teacher, style, etc.
Professor Cicero Costha is a great teacher and example for us by his life story and his humility. He has also inspired many!
4. You did not start with Cicero Costha and actually moved to Sao Paulo to continue your training. With the abundance of quality BJJ schools in Sao Paulo, what made you choose Cicero Costha?
Because he is a humble person and has great technique nand teaching ability.
5. Are you still living at the academy?
Yes we still do, but not for the fact that we don’t have anywhere else to live, but for the fact that living there is the best for our training as we can train as much as we want! Professor Cícero had even arranged for a house for use to live, but we didn’t want to. Here it’s like family, where everybody helps each other out. And we’re never late to training. 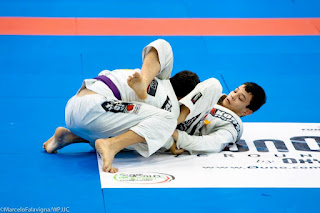 6. Though you 2 are on the smaller side, you always throw your names into the absolute competitions. What are your thoughts on this? Are you not afraid of getting hurt?
When always seek to be out of our comfort zone not only in the academy but also in competitions. That also  does not mean that we are rulers in our category, because there also big names in it.
7. When playing guard, how concerned are you about foot locks? (Though not applicable now, when you reach brown belt, people can start attacking toe holds, knee bars etc.)
We train a lot of attacks and defenses for footlocks and kneebar so as not to be eventually surprised in brown and black belts. 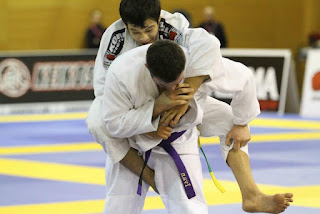 8. There were rumors on the internet that a certain Black Belt from Alliance came to train with you guys and couldn’t pass your guard. Is this true?
No that’s not true. We trained with several black belts of Alliance and all of them had a technical level far superior to ours. They passed us for sure!
9. What are your plans in 2012 for competitions?
Fighting all the main championships, we will try to win all of them!
10. Guys we wish you all the best, you have many fans In Europe!
11. Thank you for the oportunity. OSS!
The best way to appreciate the Miyao brothers BJJ style is to watch them in action!