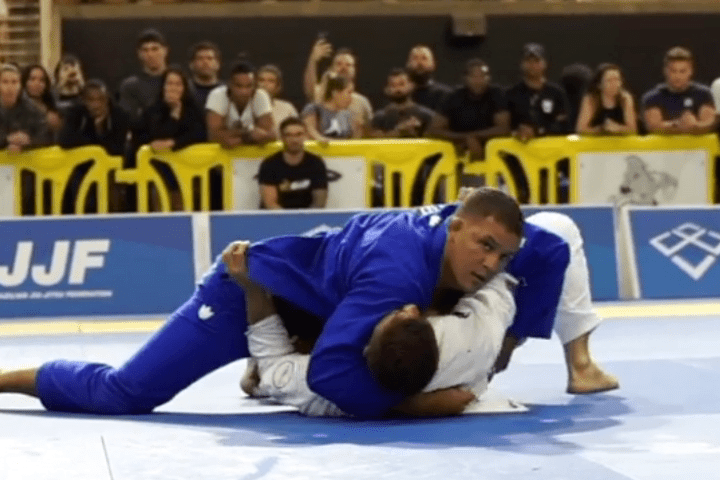 The Pans 2021 were as exciting as it was thought they’d be – and the open weight final match was as exhilarating as ever! Namely, it was a bout between Fellipe Andrew and Gustavo Batista.
It was, essentially, a rematch between the two athletes; as they’ve already met in the finals of Pans 2020. Fellipe took the gold then, and he did the same this year as well.

In the beginning of the match, Batista went for a takedown which Andrew evaded; leading Batista to pull guard. He then wrapped himself around Andrew’s leg, making him stumble backwards with a transition to 50/50. However, Andrew recovered and immediately went for guard passing attempts. Even though Batista kept him at bay by trapping his leg in Half Guard, his opponent managed to pass and secure his three points.
Then, Andrew went for a Knee On Belly in order to transition to Mount. Batista caught Andrew’s legs with his own, and then inverted – catching Andrew’s leg in the process. What ensued was a leg entanglement from which Batista attempted to control Andrew’s back while his opponent tried to turn towards him. Then, Andrew succeeded in entering 50/50 from the bottom and reversed position.

However, Batista had a hold on Andrew’s lapel and managed to wrap his arm around Andrew’s leg, keeping his foot trapped. He then got back up to his feet and scored points for the sweep. He then locked a 50/50 position; keeping the hold on the ankle as Andrew tried to gain top position again.
Even though Batista succeeded in getting on top, with Andrew’s legs wrapped around his leg, his opponent managed to topple him. The two ended up in a bottom 50/50 position. Andrew, then, got in a Lasso; and ultimately managed to topple over Batista yet again. Batista wasted no time, however, and came up on top yet again.

In the end, Andrew won the match with an 18-8 score. A great aid in this score were the last 30 seconds of the match, where Andrew came up on top off a scramble and established Side Control. As a result, this was Andrew’s second consecutive Pans open weight gold.
However, it’s important to mention that both Andrew and Batista already won gold in their respective divisions before they met in the open weight finals. That means that Andrew came off with a double gold from this years’ Pans tournament.