Jordan Burroughs: “I Want One MMA Fight Before I Retire, Just One” 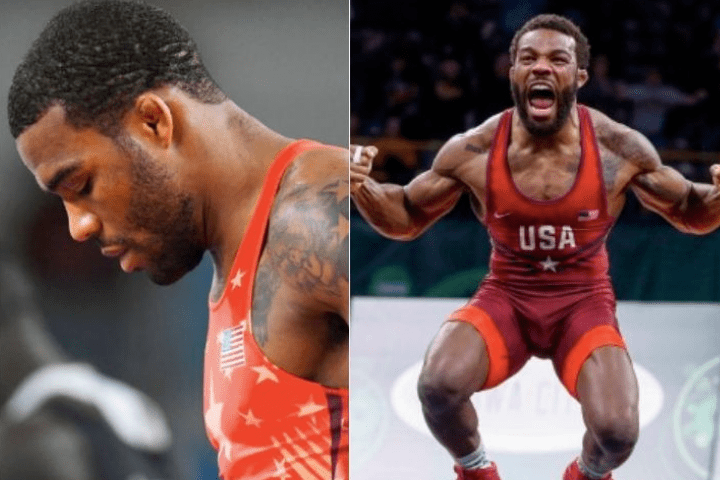 Jordan Burroughs is one of the most recognizable and dominant wrestlers of all time. The 33-year old began with wrestling when he was just 5 years old and became an Olympic Gold Medalist in 2012. Then, in 2013, he won the World Gold Medal; now, he and John Smith are the only American wrestlers who’ve won 3 World or Olympic Gold Medals in a row.
Today, Jordan is nearing retirement. However, in a recent tweet, he expressed his desire to compete in mixed martial arts at least once beforehand:

I want one MMA fight before I retire. Just one.

In a recent interview with MMA Hour, he explained that he doesn’t want to live with regret, knowing that he never competed in MMA:

I feel like I have this calling where I’m like, deep down inside, when it’s all said and done and my body’s banged up for good. And I’m walking away and putting away my wrestling shoes, I’ll always have that thought, like: ‘Damn, what would it be like if I would’ve gotten into the cage?’ And I don’t want to live with regret.

Burroughs has a lot of questions on his mind when it comes to competing in MMA, though:

OK, can we do this? Is this even possible? Will someone even take me on for a singular event? And does it make sense timeline-wise? Does my wife agree with it, number one? And then I think lastly is, can I still be the best wrestler in the world and go out and commit to training for a fight simultaneously? Sometimes when you chase two things, you don’t get either. So I’m hoping that I can still maintain my position in the wrestling world by being the best at what I do, my craft that I intended to be the best at, but also I just have a desire, bro. I just have a strong desire to get in there and see what I’ve got.

He emphasized that his goal was to push himself; just as much it is to make additional earnings by venturing into the mixed martial arts world:

But then also it’s the ability to just like garner financial resources relatively easily. It’s not easy, it’s not an easy sport. But from all accounts that I’ve heard from wrestlers, former wrestlers that are in MMA world, they’re like: ‘It’s a lot different. The training is not as rigorous. It’s a lot more sharpening.’ And I’ve seen guys that I’ve competed with go on and be successful.

I watched Justin Gaethje and Michael Chandler in the ring last week, and those guys are phenomenal fighters, but I’ve been able to compete with both of them in wrestling. And so I’m like, if they can do it, I believe I can do it. I’ve got a unique set of skills, so I think I could do that.

Check out the rest of Jordan Burroughs’ interview below: