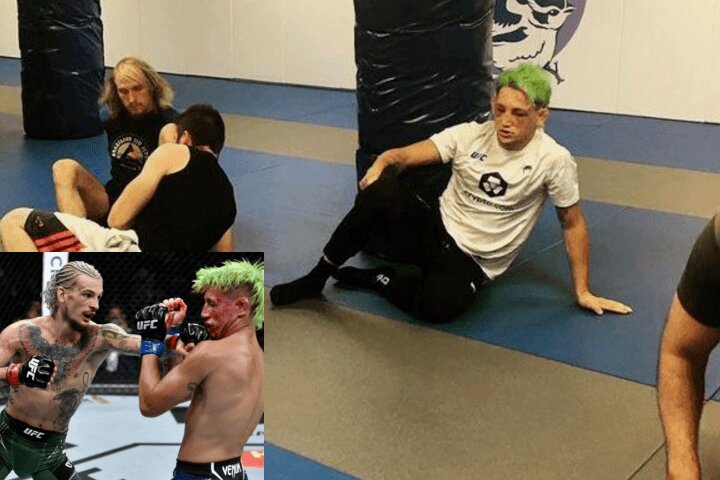 Some people are built differently from others. They posses formidable discipline, an admirable work ethic, and the drive to be one of the best in their chosen fields of work.
One of them is Kris Moutinho, a mixed martial arts fighter who recently fought his UFC debut match. In an absolute “war” with Sean O’Malley, he ended up being defeated… But also managing to win through sheer power of will at the same time.

Moutinho’s UFC 264 loss was one of the most impressive ones in the history of MMA. He absorbed 230 significant strikes… Which is the second most for a three-round fight in the UFC history.
Only a month prior, he was working in a paint factory. During the UFC 264 fight week, he told the reporters:

I had a job where I was working 80 hours a week and literally this beginning of June, I decided I’m done with this. I was working in a paint factory, I just ran a line, filled paint cans. Made okay money. But it’s not what I love. The only thing I have ever been happy with is fighting and training.

As an end result, the young up-and-coming-fighter earned a $75,000 bonus for his Fight of The Night performance.

But that’s not all. As reported by SPORTBible Australia, after winning the bonus Kris showed up to the mats and coached his Jiu-Jitsu class the very next Monday morning:

Works 80-hour weeks at a paint store
Takes a fight against Sean O’Malley on short notice
Happens to be his UFC debut
Showed incredible heart during the bout
Walked away with the $75k bonus which he described as “life changing”
Oh, and he still coached his Jiu-Jitsu class the following Monday morning