Felipe “Preguiça” Pena:”In The Black Belt At The Pan, I Feel Like A Rookie & I Like That Feeling…” 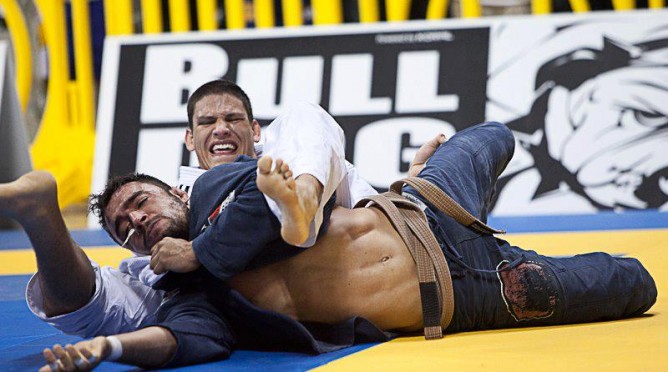 Multiple time BJJ World champ at lower belts Felipe Pena , nicknamed “Preguiça” (the laziness), is now trying to make a name for himself at the black belt. He is looking to capture his first title in the black belt at the Pan Jiu-Jitsu, which occurs between 20 and 24 March, in Irvine, California.

Felipe, a star member of Gracie Barra has a difficult mission to achieve the gold. He is in the medium heavy category with such aces like Romulo Barral, Tarsis Humphreys, André Galvão, Abmar Barbosa and Guto Campos.

Regarding his preparations for the Pan, he says:”I am very happy and excited to fight in the middle of these big names in my category. I’m eager to win. Nobody likes to lose, but I learned a lot from every defeat and I will be better in the coming matches. It made ​​me stronger.”

Regarding what we can expect from him at the Pan, he promises some surprise moves: “I learned that as a black belt there is no margin for error. I love the modern Jiu-Jitsu and different positions and I’m always training it. If the opportunity arises I will definitely try to apply these positions.”

His main trainer in the States, Romulo Barral and Felipe are in the same weight class. Regarding a possible meeting with his mentor: “Rominho has helped me in everything I needed and I am eternally grateful to him for everything he did. He became a brother to me and if we meet in a final, I do not intend to fight him. We do not know yet who would take the gold, because there is a long way and lots of fights to make it happen. But regardless of who gets the gold, closing the division would be a joy and immense satisfaction for me. I think it’s one of the toughest categories and will certainly have several exciting fights to the public. I fit in that category as a rookie and I like that feeling. I’ll do my best to get out of each fight as a champion.”

Regarding brown belt kingpin Keenan Cornelius, Felipe had this say about who he thinks can beat him: “Keenan has a very versatile and modern game. I love watching his fights. I think Jackson Souza would make an interesting fight with him.”