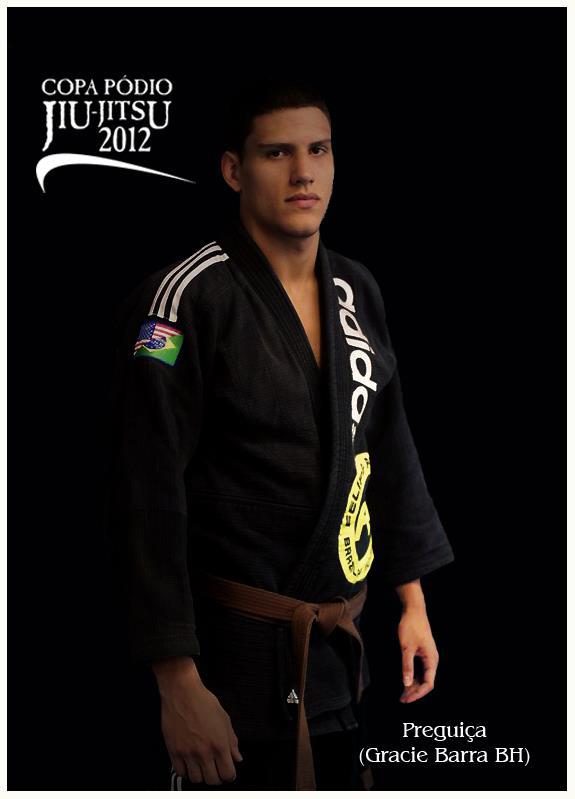 Felipe Pena is one of the big names in the brown belt division. The phenom is the current brown belt middle heavy World Champion and 2nd place in Absolute. In this Interview with BJJ Eastern Europe, Felipe tells us about training with Romulo Barral, His training regime, his Superfight at Copa Podio with Leandro Lo, and about eventually facing the dangerous Keenan Cornelius.

1. Hi Felipe, can you please introduce yourself to the BJJ Community of Eastern Europe?

Hi my name is Felipe Pena and my nickname is “Preguiça”. I am 21 years old. I have been training since I am 15 at Gracie Barra BH at my home town of Belo Horizonte in Brazil. Vinicius Magalhaes “Draculino” used to be my professor until I got the blue belt and after that he moved to US and Marcelo Uirapuru and Sergio Benini started to run the academy with Draculino’s supervision. My main titles are:

With his brother “Tio Chico”

I started training because of my brother Augusto Vieira “Tio Chico”. When I was young I always watched my brother traveling to tournaments and how BJJ was good for him. So he introduced me to the gym and to be honest when I started, I did not really like BJJ because I used to be a little fat and everyone would just smash me. I was a little lazy and that’s why the nickname Preguiça came (means lazy boy) but I wanted keep training to lose weight. rsrsrsrs After 2 months of training I started to love that sport and started training more and more but when someone gives you a nickname in Brazil it will follow you forever no matter what hapens Hahahaha.

3. At what point in your life did you realize that you wanted to dedicate your life to Jiu-jitsu? What are your other interest apart from Jiu-Jitsu. Do you have time do a have a normal social life with all the training and competing?

In my first year at blue belt, I started doing some tournaments and decided that I wanted that for my life so I tried to follow my brother Tio Chico. I tried to do all the trainings that he did, eat the same thing as him, etc…. Besides BJJ I like to stay with my girlfriend, my family, friends, watch some movies, etc. But all my life revolves around BJJ. Monday to Saturday, my life is just training, rest, eating and teaching, and I love that.

I really like to compete and I try compete as much possible. I really like that felling before the tournaments and the idea to test my BJJ against another competitor.

5. Please tell us the time you spent in the States training and competing? How was is it training with a beast like Romulo Barral on a regular basis? What are the main lessons that you have learned from him?

I always do the Romulo Barral camp before the worlds. Last year and this year I went to the Barral school before the Pan Ams and stayed until the Worlds. Romulo is way more than a coach, professor or friend to me. He has turned into a brother for me. He teaches me that there is no secret to be a champion, you just need to believe, have dedication, train hard and the results will come sooner or later. I am very thankful for him for everything he teaches me and did for me. Training with him is not fun at all. rsrssrsrsr

6. Please tell us about your academy in Belo Horizonte. How does it differ from other BJJ academies?

Gracie Barra BH there is at least 40 black belts on the academy and many others competitors that are up & coming. There are classes all day long so if you want to train hard it’s not going to be a problem.

8. You are now preparing for your Copa Podio super fight against Leandro Lo. Please tell us about how you are preparing for that fight. Is your training different for a single superfight than for a tournament.

His last fight with Leandro Lo

I really admire Leandro Lo, I really like his game and a long time before I fought with him, I always watched his matches. I am training really hard for that fight and the preparation has changed because now I am training more 10mins rounds and doing some specific training for his type of game. It will be a honor to fight him again.

9. How much strength and conditioning do you do per week and what type of exercises?

10. How would describe your style of Jiu-Jitsu?

My guard I think is still my stronger game but I am training a lot of top and takedown game and I am feeling that I am improving everyday.

11. Keenan Cornelius has recently said that he wanted to face you and he has been putting on weight to be a stronger challenger to you. What do you think of Keenan and Team Lloyd Irvin in general?

I would love fight against Keenan, I think will be a beautiful fight and that match will happen sooner or later. I don’t know much about his personality but he has a really good BJJ…. I think Lloyd Irvin is doing a great job and has great results. For sure they are one of the toughest teams around.

Copa Podio is next and after I will maybe fight European Championship. The Pan ams, Brazilian Nationals and Worlds are my big goals next year.

13. Thanks Felipe and all the best!