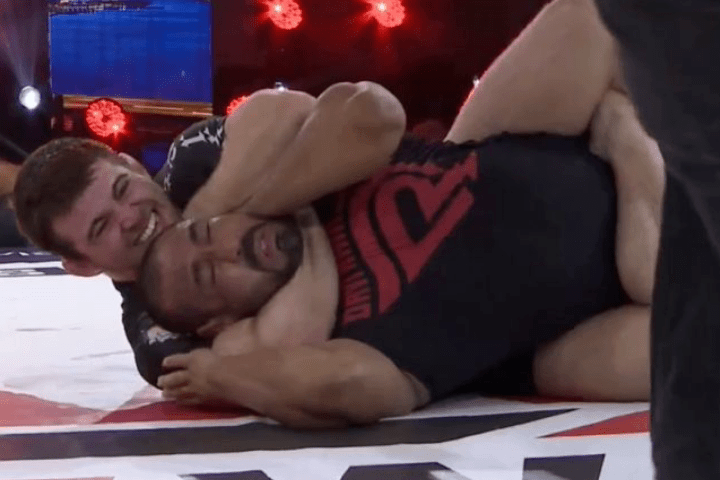 The F2W 182 promotion was a higly paced one. Dante Leon submitted Davi Ramos in the last second of the match (literally); whereas Edwin Najmi lost to Jackson Nagai.

At the beginning of the co-main event, Nagai pulled guard and then climbed up to Closed Guard. He tried to sweep Najmi, but both of them eventually ended up on their feet again. Then, Nagai pulled guard again and attempted to set up a Triangle Choke. However, Najmi successfully defended against it and continued driving forward until Nagai was back on his feet.

After that, it was Najmi’s turn to pull guard. What followed was an exchange of Leg Lock attempts. Nagai first tried to pull off a Toehold, but Najmi responded in the same way. Then, Najmi went for a Straight Ankle Lock submission and was rather persistent in trying to pull it off. However, Nagai escaped and passed Najmi’s guard quickly, securing a lapel grip. Then, he transitioned to a Mounted Triangle Choke.
His pressure was unforgiving and Najmi and, therefore, forced to tap out with above two minutes remaining in the match. As a result, Nagai was declared the winner and claimed the F2W Gi Welterweight Title.

The main event was no less packed with action. Leon immediately went for a takedown, but then switched to an Imanari Roll. Later, Ramos was trying to pass Leon’s guard but Leon was successfully defending; which led Ramos to try to leap over his opponent’s legs so as to go for a submission. However, Leon countered with a Leg Lock attempt. Ramos spun out of the danger zone and got back to his guard passing attempts.
Leon continued trying to work from underneath, and kept Ramos away with frames.

At around four minutes into the match, both of the athletes returned to their feet. Leon then pulled guard and Ramos returned to his guard passing attempts. Then, Ramos received an accidental eye poke and the match was paused for a brief moment.
After the match was resumed, Leon took Ramos down. However, as Leon tried to pass, Ramos flipped him and ended up in his Closed Guard instead. But then, after Leon’s guard opened, it seemed as if the match was going to be decided via decision.

However, Ramos tried to go for a Kneebar by leaping through Leon’s guard. Leon scrambled and managed to establish back control, locking up a body triangle. From there, he sunk in a Rear Naked Choke which Ramos tried to defend… Unsuccessfully, for he tapped out with just one second remaining on the clock.