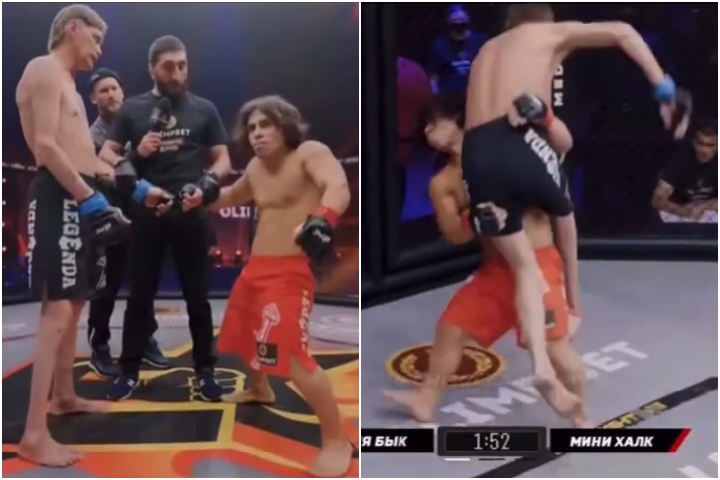 The Russian MMA promotion “Epic Fighting Championships” is well-known for putting on extremely bizarre (and oftentimes worrying) fights. The latest in line has been a match-up between a dwarf – a person with restricted growth – and a man… Who seems to be well of old age.
However, this fight comes with another twist. The dwarf is a skilled grappler and seems to have experience in MMA as well! Whereas the old man appears to have no experience in fighting whatsoever.

With that in mind, the match went down as you’d probably expect it to. The person with restricted growth immediately went in for takedowns, one after another; completing each and every single one of them. Then, he proceeded to ground-and-pound the elderly man, who showed no ability to defend himself.
Nevertheless, the referee didn’t stop the fight and the match went on. The first round ended and the second began.

It began in the same way, with takedowns and ground-and-pound action. However, it was only stopped after the fighter with dwarfism locked in a Rear Naked Choke variation and held onto it for quite some time… With the elderly man apparently being close to passing out sooner rather than later.

Watch the entire dwarf vs. old man match on the video below, as shared by Dean Lister: