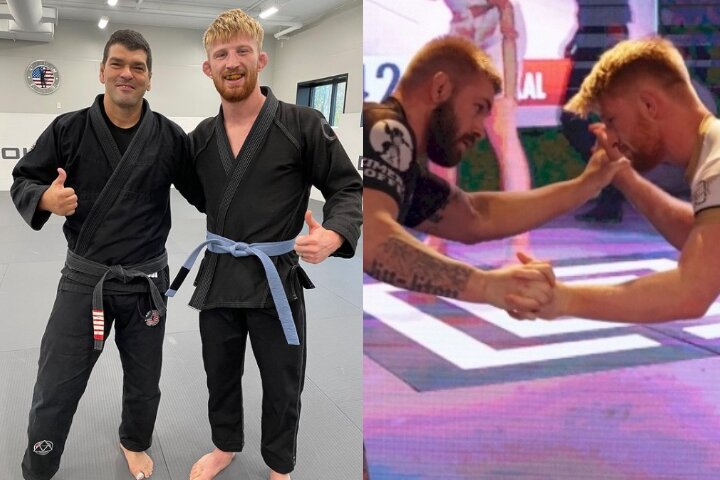 Imagine going in for your first tournament as a blue belt, getting warmed up to step on those mats… Finally, the announcer calls your name and you step to the side, waiting for the ref to wave you in.
But then you look to your right – and who is your opponent? Yep, that’s Bo Nickal – who’s just been promoted to a Brazilian Jiu-Jitsu blue belt!

He received his belt from Marcel Ferreira, who is the American Top Team’s head coach. Ferreira shared the news on his Instagram account:

Nickal is an U-23 world champion & an NCAA All-American wrestler. Late in 2019, he faced Gordon Ryan in a modified rules grappling match where Leg Locks were not allowed.
Even though he did well throughout the match (and did not train BJJ at the time!), Nickal lost via Triangle Choke in the end. Ryan gave him props on social media nevertheless:

After finishing one of the most fun matches of my life here are my thoughts. First of all, stalling calls were not as strict as id hoped, ibjjf rules state that if you leave the mat in a secure position that you start in the same position in the middle of the mat, i had 3 or 4 cross ashi entrances where he dragged me out of bounds and we were started on the feet again which was not something i was expecting and kept the match standing far longer than i had expected.

Overall i scored 3 takedowns with kani basami and he scored 1 with a huge back arch which finally got the match down to the ground after around 13 minutes. After being on the ground for roughly 1 minute i was able to enter into shoulder crunch sumi gaeshi. As he defended i moved into sankaku (triangle) and he tried his best to pull out. Similar to my match with josh barnett i played the dilemma between juji gatame (arm bar) and sankaku (triangle). As he tried to pull out of the triangle before my legs were locked i threatened juji which forced him to pressure back into the triangle to avoid arm extension. Once the triangle was locked he tried 1 last slam and ended up tapping.