What’s The Difference Between Blue And Purple Belt In BJJ? 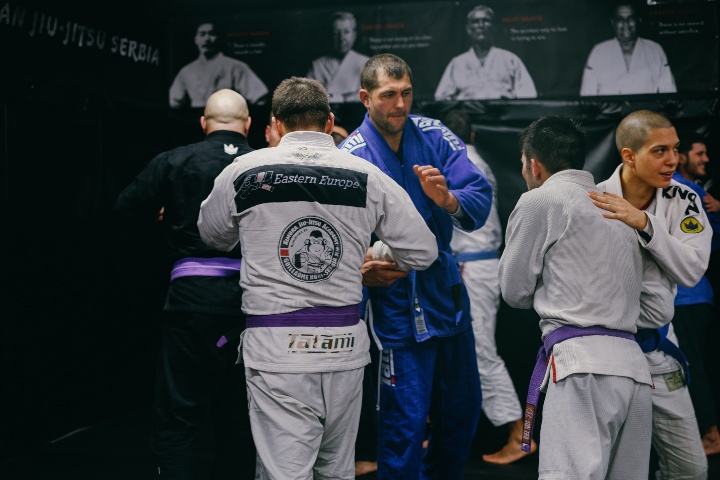 Ever wondered what’s the difference between a blue and a purple belt in Brazilian Jiu-Jitsu? Well, the simple answer is that there is a big discrepancy between the two… It just might be the biggest difference between two „neighboring“ belts, actually!
Wonder why? Here are a couple of reasons why the jump from blue to purple belt will mean so much to your Jiu-Jitsu journey.

Purple belts are nowhere near black belt ingenuity, of course (except in some really spectacular cases). However, ingenuity isn’t necessary for a purple belt – because he knows how to use the basics well and build upon them.

You see, a blue belt just might know the basics of the BJJ game. He uses them successfully more often than not, but he still makes blunders. What’s more, he often has to think about performing the basic move or two… Unlike the purple belt, who has these movements deeply ingrained in his muscle memory.
The purple belt rarely ever makes basic mistakes. And that ties well into the second point of difference.

THE PURPLE BELT MAKES YOU PAY FOR YOUR MISTAKES

Whereas it often takes some time for blue belts to notice the (basic) mistakes their opponents make, the purple belts will be quick to punish you for doing something badly.
Their reflexes are just so well-developed from all the reps that they put in, and they’ve invested so much mat time… That even if a black belt made such a mistake, they would be able to tap them out.

But this isn’t the case for blue belts; for the vast, vast majority of cases, if a black belt makes a mistake while rolling with them, a blue belt won’t be capable of capitalizing on that mistake.

Blue belts usually have a couple of good moves to use from each position. However, it’s not rare for them to begin using these techniques to the point of boring predictability.
On the other hand, purple belts know multiple techniques from almost every position. They begin to specialize in specific moves and setups. And they’re really successful at chaining these moves together; as they understand which move to use if the first one fails.

Furthermore, they aren’t just good at chaining these techniques – but they also think one or two steps ahead of their opponents. They contemplate what could (and what will) happen if they fail their move or setup… And which technique they could use to build off of that failure.

This is a huge step from blue to purple belt. It’s not an easy one to make, but you should work towards it every chance you get.

Blue belts are, quite frequently, all about learning new techniques as much as possible. And that’s not just about the techniques in training, but also the ones they watch on Youtube, instructionals, Instagram, and so on.
This is necessary for the blue belt’s evolution, of course. We’ve previously mentioned how this belt often has just a couple of techniques up his sleeve; so, it’s important for them to build their skill repertoire.

But the purple belt understands a simple truth: the skills of BJJ aren’t just about the techniques, but about concepts as well.

He uses this truth in an effective manner, by understanding, remembering, and using concepts when he rolls.
In that way, the purple belt has a more in-depth understanding and knowledge of Jiu-Jitsu than a blue belt has. He’s better able to tie in everything he knows and make it work… In the same way that you will!